Controversy Over Lagos Boy Burnt To Death For Stealing A Wallet 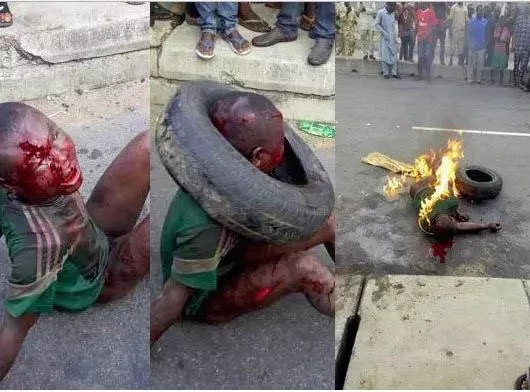 The video clip of a teenager, believed to have been burnt to death in the Orile area for stealing, has continued to generate discussions on the social media, with many commentators calling for police investigation into the killing.

A mob at the Alafia Bus stop in the Orile area on Saturday had caught the boy, whose name had yet to be ascertained, accusing him of stealing a wallet.

It was gathered that after the boy was beaten to a pulp, the mob got a tyre and set fire to the boy.

A witness, who gave his name only as Nzekwe, said the mob burnt the boy, claiming that he came with three accomplices, who escaped after the theft.

He said, “It happened at the Alafia bus stop on Saturday. The teenage boy was trying to steal someone’s wallet. The teenager was said to have come with three other friends. But the victim held the teenager and raised the alarm.

“The other accomplices escaped when the teenager was caught. The victim held him. The mob descended on the teenager and beat him until he collapsed. One of the hoodlums got a tyre and the mob set fire to the brutalised teenager.”

Another witness on Facebook, who gave his name only as Harrison, alleged that the deceased belonged to a robbery gang, which usually stabbed victims who refused to part with their property.

He said, “My house is near the scene of the incident. Alafia bus stop is notorious for phone thieves. I lost my younger brother to the thieves in January 2016. He was 20 years old and was coming back from a rehearsal when he was attacked by the thieves at that bus stop.

“He was holding his friend’s Samsung Galaxy Tab. They stabbed him in the neck and my brother collapsed. He was rushed to a hospital, but he died minutes later.

“On Saturday, I was going somewhere when I witnessed the lynching of the thief at that same bus stop.

“I am against lynching, but this particular incident is very personal to me. I do not support jungle justice, but these teenage criminals are ready to kill during their robbery operations.”

Another resident confirmed to our correspondent that the deceased was not a seven-year-old boy, burnt to death for stealing garri, as had been widely circulated.

She said, “The command received the report through the social media that the incident occurred in the Orile area.

“The CP has directed the DPO in charge of that jurisdiction to investigate and brief the command.

“If that incident actually happened, be assured that the perpetrators would be arrested and prosecuted. The command will not tolerate jungle justice irrespective of the offence committed.”

Posted by Lawrencia at 10:20 am
Email ThisBlogThis!Share to TwitterShare to FacebookShare to Pinterest
Labels: Crime