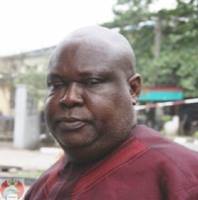 The convict was arraigned on 12 May, 2015 on two-count charge bordering on obtaining money under false pretence brought against him by the EFCC.

The money was paid into his domiciliary account, with an understanding that Meregini would pay the Naira equivalent to the petitioner within five (5) days of the transaction.

Meregini allegedly issued a post- dated cheque to the petitioner and when it was presented, it was returned unpaid.

The petitioner said that all efforts to make Meregini refund the money yielded no result.

He pleaded not guilty to the two-count charge and the matter went into full trial.

Justice Jose found him guilty and consequently convicted and sentenced him to three years imprisonment without an option of fine starting from the date of judgement.

The Judge also ordered the EFCC to trace his assets and pay the complainant.

Posted by Unknown at 9:13 am
Email ThisBlogThis!Share to TwitterShare to FacebookShare to Pinterest
Labels: Crime