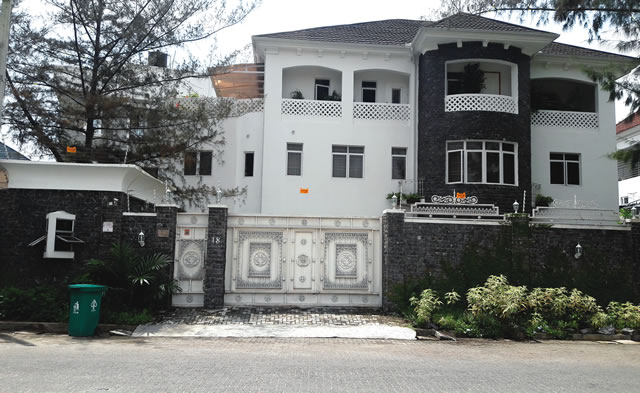 A Federal High Court Judge, Justice Rita Ofili-Ajumogobia, risks losing properties worth about N500m if she fails to explain to the Economic and Financial Crimes Commission where she got the money to buy the houses, The PUNCH has learnt.

Impeccable sources within the commission told our correspondent that a house located at 18 Lai Ajayi Bembe Street, Parkview Ikoyi, Lagos was traced to the judge while another property on Atlantic Drive, UPDC Estate, Lekki, which has been marked by the EFCC, was said to belong to the embattled judge.

Our correspondent, who visited the property located at Ikoyi, observed that the property which is a two-storey building stands close to the house of a former Minister of State for Defence, Senator Musiliu Obanikoro, who is in the EFCC custody.

A source at the EFCC told our correspondent that the Ikoyi property was searched and incriminating documents were found.

It was learnt that the judge’s property which is a two-storey building with a detached quarters, costs over N350m while the one in Lekki costs over N120m.

The source at the EFCC said, “When we first invited her, she told us that she was ill and had been admitted at the Gold Cross Hospital, Bourdillon, Ikoyi. When we visited the place, we found out that she was not there.

“Moments later, some of the hospital staff tried to sneak her into the hospital but they were caught red-handed and they apologised. We later led the judge to her Parkview residence and searched the whole place.

“When asked where she got the money to build such a house, she said she got some money from her son who won a case against the London Police. She also gave some explanations which we are trying to verify.

“The Deed of Agreement is in someone else’s name but it carries her signature.”

Speaking further on the second home at Lekki, the detective said the judge claimed the house was not hers but a rented property.

He said, “At the Lekki home located at the UPDC Estate, she claimed the property was rented but we don’t believe it so we have marked the building and it is under investigation.”

The source said another property in London had been traced to Ajumogobia.

He added that the house was hurriedly paid for despite the fact that the mortgage taken on the property was supposed to elapse in 2018.

He said although her name was not written on the title documents, a company allegedly belonging to the judge was used in buying the property.

He added, “We found out that she is a director in a company known as Silver Step Incorporated and that was the name used in buying the London property. The property was bought on mortgage and it was supposed to elapse in 2018. However, payment was completed in 2014.”

On Tuesday night, the EFCC stumbled on a transaction involving N18m ($120,000 as of 2012) wired to a foreign account from her domiciliary account for the purchase of the London property in 2012.

The source said, “Ajumogobia owned up to the money but claimed it was a loan obtained privately from a family friend. The ‘family friend’, who is a chairman of an oil and gas company from where the funds emanated, has been invited by the commission for questioning. So far, he had told operatives that the money was an assistance he rendered to her.

“Inquiry into the loan facility as claimed by both of them showed no formal agreement or documentation as to how and when the repayment would be made.

“However, the oil and gas company chairman is presently telling the commission the extent of his relationship and involvement with the funds which was wired into the judge’s personal account sometime in 2012 while she was already a sitting judge of the Federal High Court.”

Ofili-Ajumogobia had last year, acquitted a former Minister of Aviation, Chief Femi Fani-Kayode, who had been brought before her by the EFCC for alleged money laundering and embezzlement of funds to the tune of N100m.

Following allegations of misconduct levelled against her regarding an election matter, the National Judicial Council barred her from receiving any promotion for the remainder of her career.

Apart from Ofili-Ajumogobia, seven other judges are currently under investigation by the EFCC and the Department of State Services.

Posted by Unknown at 10:36 am
Email ThisBlogThis!Share to TwitterShare to FacebookShare to Pinterest
Labels: NationalNews