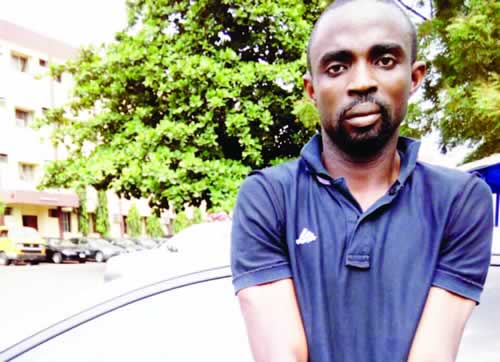 The Lagos State Police Command has arrested a 35-year-old, Michael Atanda, for threatening to expose the nude pictures of four women he met on Facebook unless they paid money into his bank account.

Punch learnt that Atanda was arrested by operatives of the Rapid Response Squad on Thursday.

The police said the suspect was initially arrested in 2015 for defrauding a woman of N700,000; adding that he was thereafter charged to court.

Our correspondent gathered that Atanda, a National Diploma holder in Computer Science from an institution in Lagos, allegedly blackmailed his four new victims after he had collected N121,000 from them.

The police said he told the victims that if they did not pay, he would leak their nude pictures on the social media.

In his statement to the police, the suspect, who said he had been impersonating as Segun Bayo on Facebook, added that his strategy was to add several ladies on Facebook and after two weeks, start chatting with them.

He said, “The picture on my Facebook account showed a young man, who was based in London. As part of my introduction to ladies, I told them I was a construction engineer and that my parents lived in Europe.

“After some time, I would lure them into sexual conversations during which I persuaded them to send their nude pictures to me. They usually sent the pictures.

“I usually pretended that I was interested in a serious relationship with them, and that very soon, I would be coming to Abuja on a business trip, during which I would see them.

“I also had some computer software that transformed my Nigerian telephone line into an international line.

“As soon as they had sent their nude pictures, I would come up with all manners of stories and I would begin to blackmail them.”

Atanda confessed that he made N121,000 from his latest victims.

He said, “As soon as they sent their nude pictures, I blackmail them. I have collected N121,000 from my latest victims.

“It is true that I was jailed last year after fraudulently collecting N700,000 from a lady I met through a dating site. The case is still pending in court.”

The police said Atanda had 210 friends on his Facebook page, and over 195 were young ladies.

One of the women, Lizzy, was said to have reported Atanda to the police, while the other three victims were discovered during investigations.

They reportedly told the police that they paid the suspect so that he would not leak their nude pictures on the internet.

The police said Atanda had also opened a bank account in one of the commercial banks.

The Lagos State Police Public Relations Officer, SP Dolapo Badmos, said the police would carry out a thorough investigation into the case to aid prosecution.

“The suspect has been transferred to the State Criminal Investigation and Intelligence Department, Yaba, for further investigation.

Posted by Lawrencia at 8:22 am
Email ThisBlogThis!Share to TwitterShare to FacebookShare to Pinterest
Labels: Crime