I Only Slept With 3 Of Them, Says Football Club Manager Who Sodomised Teenage Players In Lagos 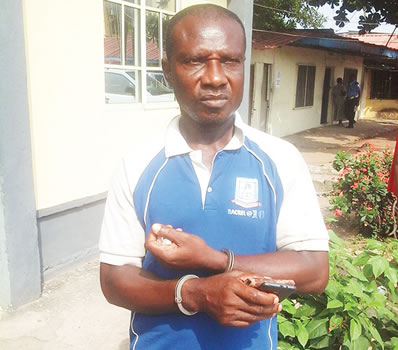 The Lagos State Police Command has arrested a football club manager, Frank Darlington, for allegedly sodomising three of his teenage players in the Agege area of the state.

Darlington, the manager of Soccer Warriors Football Academy, Pen Cinema, was arrested last Thursday by the Elere Police Division, after one of the victims reported him to the police.

It was learnt that the club manager, who hails from Imo State, allegedly took three footballers to his house on separate occasions after training sessions, and sodomised them.

PUNCH Metro gathered that Darlington’s wife and only daughter, a three-year-old, lived in Imo State, after the two got divorced in March 2016.

The police said the suspect allegedly penetrated the victims’ anuses, and would be charged for sodomy.

Speaking with PUNCH Metro, 49-year-old Darlington confessed to the crime, saying he started to rape his players in February 2015.

He added that he committed the act to derive pleasure.

The suspect said he, however, stopped molesting his teenage players since July 2016, knowing the implication of his indulgence.

He said, “I have a female daughter, and she is three years old. I manage the Soccer Warriors Football Academy in the Pen Cinema, Agege area. It was in February 2015 that the rape started. I usually had sex with my boys just to play with them. It was romance. We had fun together. The last one I did was in July 2016, knowing that it could get me into trouble.

“I slept with only three of my footballers. There was one of my boys that had not been coming for training since last week. When I asked after him, I was told that he was sick. I did not know that he had reported to his mother and she had told the police.

“I do not know what moved me to be sleeping with them. I have been coaching for about 12 years. My wife stays in the South-East. She left me in March 2016. The sex with the boys was not for any ritual. I only derived fun from it.

“I knew it was a crime and that was why I stopped this act since July. I pledged not to go back into this.”

One of the victims, Kehinde (pseudonym), told our correspondent that Darlington threatened him that he (Kenny) would die if he told anyone about the sodomy.

The 18-year-old said he was forced to tell his mother when Darlington made it a habit.

He said, “He always had sex with me and with most of us. He started last year. The first time he approached me was after a training session. We were on the football pitch and he said my performance was bad and I should meet him at home for a discussion.

“When I went, he and two boys were at home. His wife did not stay with him. He sent the two boys on an errand and asked me to come into his room. He then instructed me to remove my trousers, and he molested me.

“He did not use any protection. He did not give me any money, but he threatened that I would die if I told anyone. I cannot count how many times he had done this to me. I told my mother when I was tired of his abuse. My mother reported him at the police station.”

Another victim told our correspondent that a large number of footballers at the academy had withdrawn because “he always slept with two or three of us every week.”

The Lagos State Commissioner of Police, Fatai Owoseni, who paraded the club manager, said the suspect would be charged to court at the end of investigation.

“There is no place for criminals to hide in the state. We enjoin the residents of Lagos to report suspicious movements and persons to the police,” he added.

Posted by Lawrencia at 9:43 am
Email ThisBlogThis!Share to TwitterShare to FacebookShare to Pinterest
Labels: Crime