‘I Robbed To Raise Money To Fund My Poultry’ 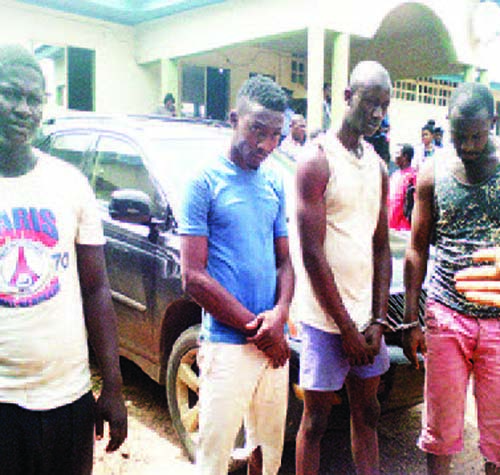 A suspected leader of a car snatching syndicate in Aba, Abia State, identified as Ladislas Ukpabi, says he robbed to raise money to expand his poultry.

He said the economic recession in the country and his dwindling poultry business made him to consider armed robbery as an option.

Ukpabi said, “I regret what I did. Our leaders should do something to help youths in the country so we can have jobs.

“If I am well funded, I can raise about 10,000 birds. I am not boasting; I can do that very well right from the hatchery to the laying point.”

The suspect, who claimed to be a graduate of Animal Science, was arrested by police operatives in connection with car theft.

It was learnt that one Felix Anyanwu of Umuoda Road in Aba had made a complaint that his Lexus Rx 330, with number plate, JJJ 618 DL, was stolen at gun point on August 8 by some hoodlums.

It was gathered that the police in its investigation arrested one Igwe Uloma, while re-registering the stolen vehicle for one Obinna Nwokeji of the Deeper Life Road, Umuada Uratta  Aba.

Nwokeji initially claimed that he bought the vehicle from Ukpabi  for N600,000,  but later confessed to be a member of the syndicate.

Other items recovered from the hoodlums include one locally-made single-barrelled gun with six live cartridges, one Honda car marked, SSM 143 KK, a master car key, a number plate, AK 103 GR, and a fan.

The police also arrested one Moses Nwosu, an automobile panel beater based at Orji in Owerri, Imo State, who allegedly repainted the stolen vehicles from its original colour to black.

Nwosu, however, said he was not aware that the vehicle was stolen.

He said, “I didn’t know the car was stolen, I met Obinna through one of my brothers who is a driver, he asked me to repaint the car to black colour for his father’s burial.

“I asked him why he wanted to repaint it and he said he didn’t want his family members to know that the car belonged to his father.”

“But before I could finish the job, he called me to come and pick another car to work on; that was how I was arrested.”

The Abia State Commissioner of Police, Mr. Adeleye Oyebade, said the suspects had confessed to the crime and would soon be arraigned in court.

Posted by Unknown at 8:30 am
Email ThisBlogThis!Share to TwitterShare to FacebookShare to Pinterest
Labels: Crime