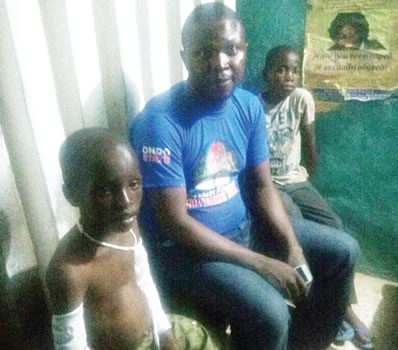 The police in Lagos State have arrested a man, Adeyemi Adekunle, for allegedly brutalising his eight-year-old son in the Dopemu area of the state.

Our correspondent learnt that Adekunle, who was arrested by the Dopemu Police Division on Monday, allegedly fractured the boy’s two arms for missing from home for two days.

It was gathered that the boy, whose name was not disclosed by the police, had gone missing on Saturday from their apartment on Kolawole Street, Dopemu.

Adekunle was said to have gone to the police on Sunday to report a case of missing person.

PUNCH Metro was told that the victim was, however, seen on Monday wandering in the area, after which the father was informed.

Our correspondent gathered that Adekunle, who had reportedly divorced the victim’s mother and remarried, allegedly beat up his son, and broke his two arms.

A police source told PUNCH Metro that the police found four other siblings locked up in a room in Adekunle’s apartment after his arrest.

He said, “The man had confessed in his statement that he was guilty of beating his son, and the four other children, whom his first wife has for him. The boy was reported to us by the dad as missing on Saturday.

“However, when the boy was found on Monday, the father got angry, thinking that the victim played a prank on him and descended heavily on him. The dad caused serious fracture to the boy’s arms in the process.

“We also found four other children locked up in the man’s house when we got there. It was the suspect’s landlord that came to report the beating.”

Our correspondent learnt that the case had been transferred to the gender unit of the state command in Ikeja for further investigation.

A resident of Kolawole Street said the victim had been taken to a hospital, where he was recuperating.

She added that the suspect would be charged to court at the end of investigation.

She said, “The father is alleged to have consistently assaulted his children after he divorced his first wife who is their mother. The gender unit is investigating the matter after which the suspect will be charged to court.

“The child with the fractured hands is in the hospital, while the command is liaising with the Lagos State Government to place the children in shelters until we see their mother. If the mother is able to take good care of them, the police will release the children to her.”

Meanwhile, the state command has arrested two robbery suspects – Ishola Dauda and Segun Idowu – who attacked some Automated Teller Machine users in the Apapa area of the state.

Our correspondent learnt that the robbery suspects, who came on a motorcycle, had a Beretta pistol with number, M1911A167, containing five rounds of 0.9mm live ammunition.

PUNCH Metro gathered that the suspects, at about 11am last Tuesday, struck at the ATM point on Liverpool Road.

They were said to have been arrested by a patrol team from the Apapa division, while attempting to dispossess a man of N300,000.

The police spokesperson, Badmos, confirmed the arrest, adding that investigation was in progress.

Posted by Unknown at 9:28 am
Email ThisBlogThis!Share to TwitterShare to FacebookShare to Pinterest
Labels: Crime