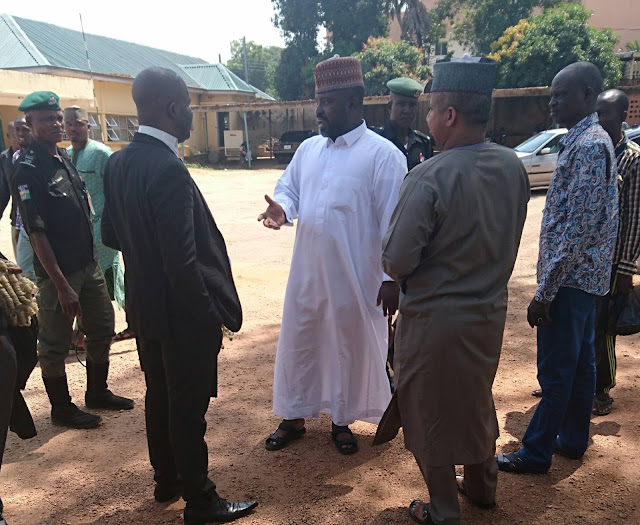 The accused person allegedly induced the complainant to part with the sum of N24, 000,000 under the guise that the said amount was management fees in respect of contract purportedly from the National Assembly for the supply of pipes and sanitary wares to the “National Assembly Quarters, Lugbe Abuja”. The purported contract, according to the accused person, was worth N2, 051,534,525.00 (Two Billion, Fifty One Million, Five Hundred and Thirty Four Thousand, Five Hundred and Twenty Five Naira Only).

Investigation into the alleged fraud revealed that the accused person had used his company Eximab Integrated Link to award the purported contract to the complainant, Fenabros Limited.

It was further revealed that in order to decieve the complainant, the accused person through his other company, Minanta Enterprises, issued two Access Bank cheques in the sum of N7,500,000 (Seven Million, Five Hundred Thousand Naira Only) each, which were returned unpaid due to lack funds in the account.

One of the charge read that " You Ahmed Tijjani Umar, EXIMAB INTEGRATED LINK LIMITED on or about the 10th of August 2010, in Kaduna, within the Judicial Division of the Kaduna State High Court with intent to defraud obtained the sum of N24,000,000 (Twenty Four Million Naira Only) from Fenabros Limited by falsely representing that the said N24,000,000 was a 3% part payment of Management fee in respect of a contract for the supply of pipes and sanitary wares which pretense you knew to be false and you thereby committed an offense contrary to Sections 1(1)(b) and punishable under Sections 1(3) of the Advance Fee Fraud and Other Related Offences Act, 2006”.

Tijjani pleaded not guilty after listening and understanding the contents of the charge.

Justice Mu'azu agreed with the argument of the prosecution and refused the bail application. The case has been adjourned to November 10 and 11 for the commencement of trial.

Posted by Unknown at 11:08 am
Email ThisBlogThis!Share to TwitterShare to FacebookShare to Pinterest
Labels: Crime