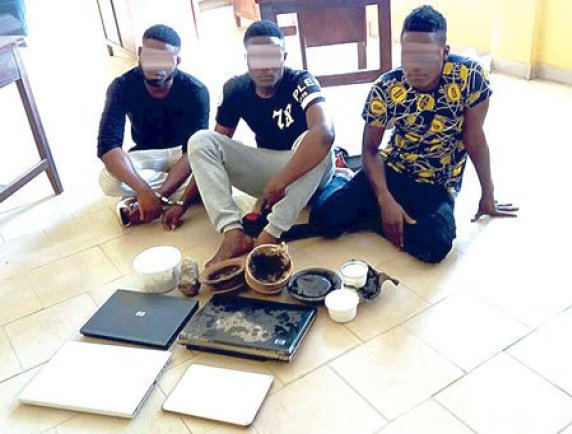 The Oyo State Police Command has arrested three internet fraudsters, who until their arrest, were into cyber crime, popularly known as “yahoo plus”. This was made known by the Police Public Relations (PPRO), SP Adekunle Ajisebutu, in a statement made available to journalists in Ibadan.

According to Ajisebutu, “their arrest was made possible following a tip-off by members of the public.

“The suspects who had been elusive for some time now, were eventually arrested after several days of intelligence gathering and painstaking investigation carried out by the police.

“During interrogation, the suspects confessed to being internet fraudsters and had defrauded many innocent victims they referred to as ‘clients’ of their hard-earned money in Naira and foreign currencies. They also disclosed that they often use charms to facilitate their illicit business.

“This they did by hypnotising victims and ‘commanding’ them to part with their Dollars and valuable properties. They further disclosed that those who had fallen victims included foreign nationals and Nigerians.”

Ajisebutu revealed that exhibits recovered from them included four assorted laptops and charms.

The police image maker said the state Commissioner of Police, Samuel Adegbuyi, has directed that a discreet investigation be carried out about their other nefarious activities at the end of which they would be arraigned.

He, however, advised youths to shun crimes and engage in legitimate businesses, even as he vowed to prosecute unrepentant criminals in the state.

Posted by Lawrencia at 10:08 am
Email ThisBlogThis!Share to TwitterShare to FacebookShare to Pinterest
Labels: Crime