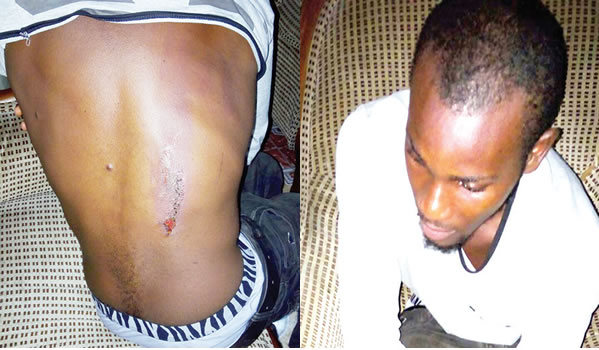 When Princewill Jumbo, a 300-level student of Rivers State University of Science and Technology, and his friends were returning to Port Harcourt from a burial in the Buguma area of the state on Saturday, little did they know that they were going to spend the rest of the weekend in police custody.

The friends are Iyoyo Soberekon, Charles Benjamin, Julius Abazie and Franklin Ordu, who is said to be a final year student of the institution.

PUNCH Metro learnt that the victims were arrested by the Anti-Cultism Squad of the state police command at a park in Buguma, where they wanted to board a bus en route to their residence in Port Harcourt around 5pm on that day.

It was gathered that the chairman of a motorcycle riders’ association had called the policemen on the telephone after an argument ensued between the victims and one of the riders who conveyed them to the park.

The police team, numbering about six, were said to have whisked away the five friends to their station on the ground that they were cult members.

Princewill, who spoke on the telephone with our correspondent on Tuesday, said the operatives undressed him and his friends and beat them with sides of cutlasses.

It was learnt that the victims, except Ordu who is still in custody as of the time of filing this report, were released on Monday.

Princewill said, “Franklin (Ordu) gave the rider N500 and requested N300 change, but the rider said he did not have change. His co-riders volunteered to split it but he refused. He said Franklin must find N200. That was how the argument started. As we were arguing, a man, who called himself the park manager, wanted to slap Franklin. We cautioned him and the next thing he did was to call the policemen on the telephone that cult members were disturbing the community.

“The policemen removed our clothes. We were left with only our boxers. They told us to lie on the floor and they started flogging us with the sides of cutlasses. They beat us up as we made our statements. When the beating persisted Franklin told them that he was a cultist. They later took us to the Swift Operation Squad office in Port Harcourt.

“Inside the cell, there is a 13-year-old boy, called Small. He told us he was arrested a few weeks ago around his house in Abonima and that his family members were not aware that he was in police custody. Others we met there said they were just picked on the roads.”

Twenty two-year-old Princewill said he was in pains, urging that the policemen, who assaulted them, should be brought to book.

“I don’t know their names but I can recognise them,” he added.

His father, Mr. Progress Jumbo, said, he parted with N20,000 because the policemen threatened to implicate Princewill.

He said, “The policemen asked me to pay N20,000 or else they would send a letter to my son’s school that he was a cult member. That was the threat they used to extort the money from me. As a father, I had to succumb to their threat. Why should I allow my son to be rusticated for no reason?”

Princewill’s sister, Mrs. Peace Asoka, said, “The authorities need to know about this incident so that the police can stop harassing innocent persons. The policemen involved in this should be brought to justice. They collected N2,000 from me before I was allowed to see my brother in the cell.”

Benjamin, one of the victims, described the incident as “embarrassing”, and demanded Ordu’s release

“They kicked my face before they used the cutlass on me. They did not behave like policemen,” he added.

The Rivers State Police spokesperson, Mr. Nnamdi Omoni, urged the victims to come to his office for the identification of the policemen involved in the alleged assault.

“As for Franklin (Ordu), somebody has to stand as a surety for him before he can be released. The person has to sign an undertaking that he will be of good behaviour henceforth,” he added.

Posted by Unknown at 9:56 am
Email ThisBlogThis!Share to TwitterShare to FacebookShare to Pinterest
Labels: Crime