Robbery Suspect, Seun Egbegbe, Lied About 'Chilling At Home', As He Spends Second Day Chilling In A Cell In Ikeja, Lagos 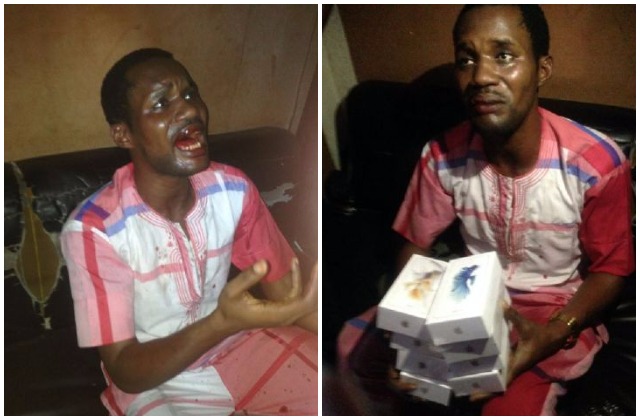 Contrary to a report credited to Seun Egbegbe that he was neither arrested nor beaten by any mob, PUNCH Metro gathered on Wednesday afternoon that the film-maker was still in police custody.

Egbegbe was mobbed on Tuesday for allegedly stealing nine iPhones, after which he was taken to the Area F Command in Ikeja.

It was learnt that the state Commissioner of Police, Fatai Owoseni, had visited the Area F Command, where Egbegbe was being detained, and was briefed on the investigation.

Egbegbe’s problem started at the Computer Village, Ikeja, after he was accused of stealing the iPhones from a shop.

After buying the phones, he reportedly told a sales boy in the shop that he wanted to pick money from his vehicle outside. He allegedly attempted to escape with the phones in the waiting jeep when the sales boy raised the alarm.

However, he was said to have told the police that he wanted to pick the money when the sales boy screamed for help and alerted the mob.

But Egbegbe on Wednesday denied the incident.

The statement, which was credited to him and went viral, stated that he was neither arrested nor beaten up by any mob.

The statement read, “The story is pretty laughable and better left in the court of public opinion. Ordinarily, I do not want to join issues with the writer of the publication, but I have a responsibility to set the records straight for my fans, friends and foes, in the defence of the truth.

“To say the least, the news did not only grossly misinform unsuspecting public; it also portrays traces of campaign of calumny by some mercenary hell bent on destroying my name, for reasons best known to them.

“I want to state here categorically and emphatically that though I was at the Computer Village to address some issues, I was never arrested for stealing 10 iPhone 7s, as stated by the writer of the story. The matter has since been resolved by the police; and the issue of me stealing phone is devilish from the said writer.

“It is germane to note that I am a charitable, humane, and grass root person, who has exhibited selflessness in communal service, which have used as a veritable tool for social development.

“Finally, I wish to inform the general public to discard the report. I am presently at home relaxing.”

However, a police source at the command told our correspondent at about 3pm on Wednesday that the film-maker was still being held for interrogation.

The source said, “He (Egbegbe) is still in our custody. His associates have been debunking the allegation. He is still in detention. The CP even came to interrogate him this afternoon (Wednesday).”

The Lagos State Police Public Relations Officer, SP Dolapo Badmos, said Egbegbe was still under investigation in the command, adding that the public would be informed on the outcome of the investigation on Thursday (today)

She said, “The case is still under investigation. We will properly brief the press on the stand of the command on the case by tomorrow (today).”

Commenting on the online statement, the PPRO said, “You are aware that he was arrested. If an online publication is saying he was not arrested, and the police said he was arrested, which one do you want to believe?”

Posted by Unknown at 9:43 am
Email ThisBlogThis!Share to TwitterShare to FacebookShare to Pinterest
Labels: Gists