Runaway Wife: Bride Dumped Groom At Their Wedding Reception After She Saw Her True Love 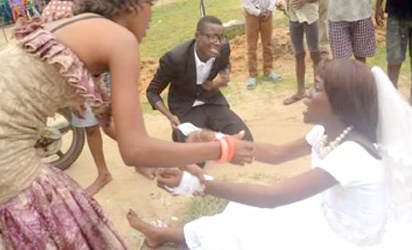 A 41-year-old man, simply identified as Julius, is finding it difficult to understand why his “wife” abandoned her marital vows midway into their wedding, shouting “I am no longer interested,” at the wedding reception in Udu Local Government Area of Delta State.

All pleas by the bewildered husband at the popular Orhunwhorhun Road for the woman to reconsider her decision were to no avail.

Her close friend told Vanguard that she saw her true love at the reception venue and decided to follow her heartthrob. The incident took place on Saturday, October 29.

The would-be bride, Roseline, 32, has since disappeared into thin air and all efforts to trace her whereabouts had yielded no result at press time.

It was a pandemonium as the wife ran out of the wedding reception and rejected her husband, saying

“I am no longer interested,” forcing the wedding reception to end abruptly.

The dazed husband, guests and bridal train ran after Roseline, caught up with her at the popular Orhunwhorhun Road, where all pleas for her to reconsider her decision and return to the reception venue fell on deaf ears.

A close female confidante of the woman, who spoke on condition of anonymity, told Vanguard: “I believe she did what she did because she saw the previous man in her life at the reception. We heard that he had earlier promised to marry the bride, but he later travelled to Lagos and never showed up again.

“When the bride waited for a long time and he (former suitor) was nowhere to be found, she decided to marry another man, who was ready although she still loved her former suitor.

“So when her true love showed up at the reception without notice, the woman saw him and decided to call it quits with her husband to follow her heartthrob.”

Posted by Unknown at 9:35 am
Email ThisBlogThis!Share to TwitterShare to FacebookShare to Pinterest
Labels: NijaDrama