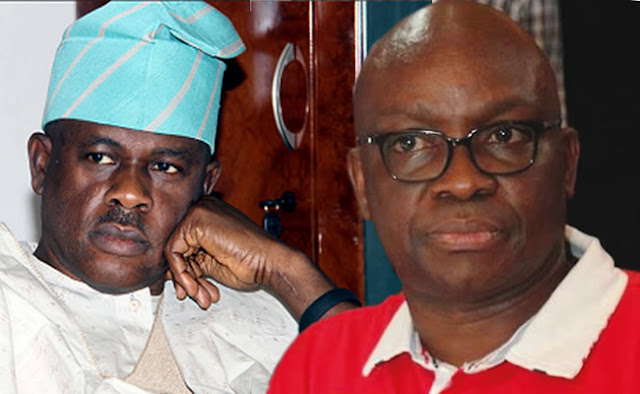 An official of Zenith Bank, Akure Branch in Ondo State, Sunday Alade, on Monday told a Federal High Court in Abuja how he and his colleagues in the bank took turn to count the sum of N1.22bn cash delivered to the aides of the Ekiti State Governor, Ayodele Fayose, by former Minister of State for Defence, Musiliu Obanikoro in 2014.

Alade, who continued his testimony as the first prosecution witness in the ongoing trial of an aide to Fayose, Mr. Abiodun Agbele, on money laundering charges, said the huge cash was in N1000 and N500 bills.

Alade said under cross-examination by the defence counsel, Chief Mike Ozekhome (SAN), that his team evacuated the huge cash, allegedly airlifted to Akure airport twice by Obanikoro, before they began counting.

He said he “got worried” when he saw the large consignment of cash.

The banker said the counting went on between 8am and 3pm for 10days.

Agbele is being prosecuted along with three companies – Sylvan Mcnamara Ltd., De Privateer and Spotless – on 11 counts of money laundering involving about N4,685,723,000,000 allegedly taken by former National Security Adviser  from the account of the office of the NSA domicile in the Central Bank of Nigeria.

The prosecution alleged that the accused persons knew the N4,685,723,000,000 formed part of the proceeds of alleged unlawful activities by Dasuki.

Earlier on Monday, Ozekhome withdrew his appearance for the second defendant, Sylvan Mcnamara Ltd. (a firm believed to be owned by Obanikoro).

Alade had also in his evidence-in-chief, identified documents, including account opening packages for the accounts of Fayose, Spotless Investment and Deprivateer and statements of transactions in the accounts.

The documents were later admitted by the court in evidence.

He told the court that Agbele gave directives on how the money was disbursed and went away with the cash balance of over N230m, which he (Agbele) allegedly took to Ado Ekiti (Ekiti State Capital).

Posted by Lawrencia at 8:44 am
Email ThisBlogThis!Share to TwitterShare to FacebookShare to Pinterest
Labels: NationalNews