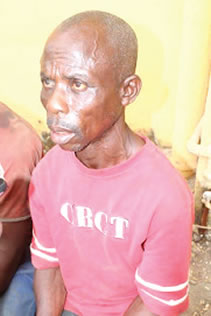 A 61-year-old man, Timothy Onyeukwu, has been arrested by the Abia State Police Command for allegedly raping a 10-year-old girl and keeping her as a sex slave in a hotel in Aba.

Onyeukwu was alleged to have tricked the victim into the hotel with ice cream and N200 and held her hostage for months. The suspect was apprehended after the police got a tip-off and swooped on him at the hideout.

The victim was said to have been rescued and reunited with her parents. The suspect was among many others paraded at the command headquarters in Umuhaia, the Abia state capital, on Wednesday.

Onyeukwu, in his statement blamed the devil for the act, saying he was forced to sleep with the victim after she made series of demand from him.

The police said intelligence report gathered by operatives of the Central Police Station, Aba, led to the arrest of the suspect, adding that the victim had been taken to a hospital for treatment.

Nta said the suspect was apprehended by operatives of the Special Anti-Robbery Squad, adding that a cut-to-size locally-made gun was recovered from him.

“Items recovered from them included two knives, a lady’s handbag containing a bible, a lady’s belt, a pair of eyeglasses, a desktop charger and a spanner. The suspects have been terrorising Aba and its environs,” he said.

He explained that the suspects would be arraigned in court at the end of investigations.

According to Oyebade, the arrests were made possible by the synergy between the police and members of the public.

The commissioner urged people in the state to be vigilant, saying the police were on the alert to crack down on hiding places of criminals in the state.

Posted by Lawrencia at 11:45 am
Email ThisBlogThis!Share to TwitterShare to FacebookShare to Pinterest
Labels: Crime