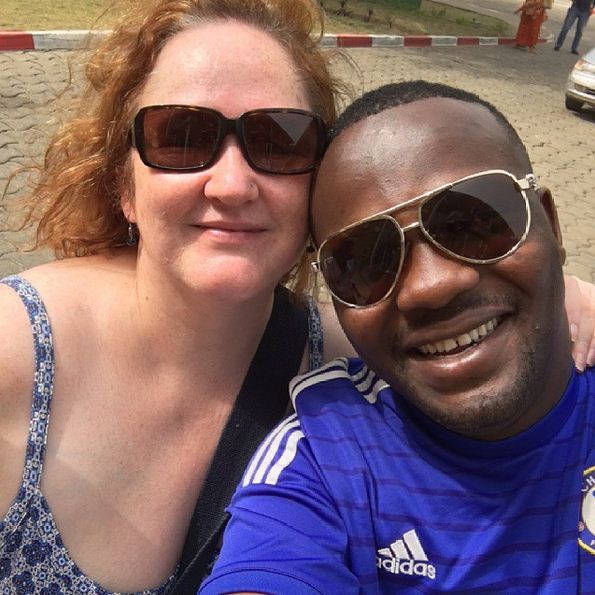 Fran, the estranged British wife of actor, Yomi Fabiyi, has said that the actor didn’t marry her in order to get his green card.

Before now, Yomi Fabiyi had announced via his social media pages that he was divorcing Fran, whom he had been with for about four years.

The actor stated among other things that the main reason he was separating from his wife was because they could not agree on where to live together as husband and wife.

According to Fabiyi, the plan they had before marriage was that his wife would move to Nigeria but she later developed cold feet and this led to a crack in their relationship.

He posted on his Instagram page, “It’s so sad that a lot of people never give me the benefit of the doubt. Only a handful think it is right to respect my freedom of choice. I have been unlucky in life, most of what I do normally have opposite impression irrespective of my positive mindset. I cannot help it and will rather prefer to continue to be as real as possible, I am used to being misinterpreted my entire adult life. I never aim to hurt anybody in words or actions before them or behind them. I am never raised that way. Hopefully Fran accepts my proposition to end this marriage now as I cannot continue this way, I am not happy anymore as we edge close to the 4th year anniversary.

Fran is such a beautiful woman, supportive and wish I come live in England, take up employment and study. I have used her documents to renew my normal visa only, so no question she is not willing, I never said that. With all humility, if she never promised me she was coming to take up employment in Nigeria and live with me, maybe we might not have secured the dating. I have made it abundantly clear I am not prepared to live abroad as my career was just gathering shape then. I am focused on my career and keeping my fans and admirers entertained. I have an absolute right to do whatever makes me happy provided it is nothing criminal, illegal, immoral or anti-social. I am NOT interested in the reason two adults came together. It’s crude and an uncivilised thing to do for me. I hope to find true love again while I push for a hitch-free divorce as soon as possible. I will be fine guys.”

Both friends and foes had insinuated that the actor married his oyinbo wife in order to legalise his stay in the UK.

However, when Saturday Beats placed a call across to Fran in England, she sounded unhappy about the divorce but seemed to have resigned to fate. She told Saturday Beats that she was very sure her husband did not marry her because of a green card. When asked if she was still in love with her husband, she replied in the affirmative.

“I am still in love with my husband but we cannot keep living this way. I wish there was another way we could go about it but there is none. It is true that I agreed to relocate to Nigeria after marriage but plans changed and I cannot relocate from England. I understand that my husband cannot also move to England but we cannot keep living like this for the rest of our lives. I am very sure that he married me because he loved me and not for any green card. If he wanted a green card, he could have married a British-Nigerian or any other race,” she said.

Posted by Lawrencia at 9:45 am
Email ThisBlogThis!Share to TwitterShare to FacebookShare to Pinterest
Labels: Gists