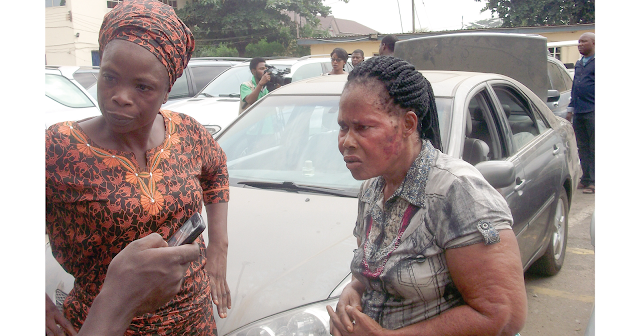 General Overseer, Divineyard Deliverance Ministry, Mrs. Peace Udoh, has been arrested by police in Lagos for allegedly luring young pregnant girls to deliver in her church and then selling the babies.

The 47-year-old Udoh was paraded yesterday alongside other suspected criminals at the Police Command Headquarters, Ikeja. She was said to have sold about 68 children delivered in her church.

The bubble burst when the aunty of a girl, Eunice Ede, who gave birth in the church took the baby away. This annoyed the pastor who reported the matter to the police. Udoh said she was a nurse before she got the call from God to establish a church.

She said: “Even after establishing the church 13 years ago, I still operates a maternity home in the church where members of my church deliver.

“After delivery, her aunty came and took the mother and her baby away. Since two months ago, I have not seen them. I don’t lure young girls into my church to give birth; I only assist them to have safe delivery.

“Whenever I see young girls roaming the streets with pregnancy, I would advise them to come to my church and take care of them until they are delivered of their babies.

After deliveries, I do charge between N12,000 and N15,000.” Eunice aunty, Miss Angela Kenneth, said she brought her to Lagos when her pregnancy was about four months old.

She said: “When we arrived in Lagos, I was looking for a cheap clinic, where I could register for the antenatal when someone introduced us to the maternity home. I was surprised after given birth to the baby when the pastor wanted to collect the baby from my sister.

“The pastor went to a police station and lied that I came to her church to steal a baby. That was how I was arrested.

“When I got to the police station, it was there I opened up and told the police what actually transpired between the pastor and my sister.” Eunice told our correspondent that her aunty brought her Lagos because of the disgrace the pregnancy had brought to her parents.

She said: “I used to go to the church for antenatal clinic every Tuesday. Unfortunately two days after my delivery, the pastor came to me that she wanted to take my baby to somewhere for prayer.

But because I have been hearing about people selling babies, I called my aunty on the phone and explained to her. That was how my baby and I left the hospital.”

Mrs. Bukola Ajala, a nurse, said she was contracted by the pastor after the nurse that was working with her before had left. She said: “Initially when the pastor approached me, I told her I did not want to involve myself in baby factory. But she denied operating such a thing.

Because she is from Calabar, some other women who are from Calabar in Cross River State and Akwa Ibom State are patronising her.” The state Commissioner of Police, Fatai Owoseni, said the woman would be charged to court after completion of investigations.

Posted by Lawrencia at 8:34 pm
Email ThisBlogThis!Share to TwitterShare to FacebookShare to Pinterest
Labels: Crime