FG To Buy N400m Vehicles For Obasanjo, Jonathan, Other 5 Past Presidents And Their Deputies In 2017 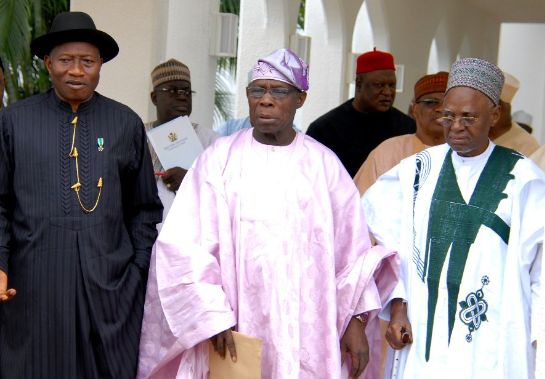 The Federal Government will spend N400m on the purchase of vehicles for the nation’s former heads of government and their deputies in 2017.

The figure formed part of the N9.882bn budgeted for the Office of the Secretary to the Government of the Federation for the year.

According to the details of the 2017 Appropriation Bill currently before the National Assembly obtained by our correspondent on Tuesday, N280.099m was budgeted for the purchase of vehicles for seven former Presidents and Heads of State.

Further details showed that N120.090m would be used to procure vehicles for four former Vice-Presidents and ex-Chiefs of General Staff.

The budget details did not indicate the number of vehicles that would be bought for each of the former leaders. The brands of the vehicles were also not disclosed.

Apart from the leaders, the office of the SGF will also buy N32m vehicles for offices and units in the office.

The government will also spend a total of N170m on the nation’s Independence Day and Democracy Day celebrations.

Both ceremonies have not been marked lavishly since the inception of the present administration.

The office is also expected to spend N1.322bn on the procurement and installation of security system across selected Ministries, Departments and Agencies.

The number of MDAs that will benefit from the procurement is not disclosed in the details.

Upgrading and maintenance of Council Chambers Conference System will gulp N55m; N35m will be spent on one Xerox D125 photocopy machine; N20.8m on purchase of 52 laptop computers; N54.35m for the purchase of equipment for the production of staff identity cards and installation of file tracking system; and N5m for the OSGF website.

Another N3.8m is budgeted for the purchase of what is called multi-functional photocopy machine for the Procurement Department and N29.5m for archival project Phases I, II and III for cabinet secretariat document and file organisation.

Posted by Lawrencia at 10:46 am
Email ThisBlogThis!Share to TwitterShare to FacebookShare to Pinterest
Labels: NationalNews