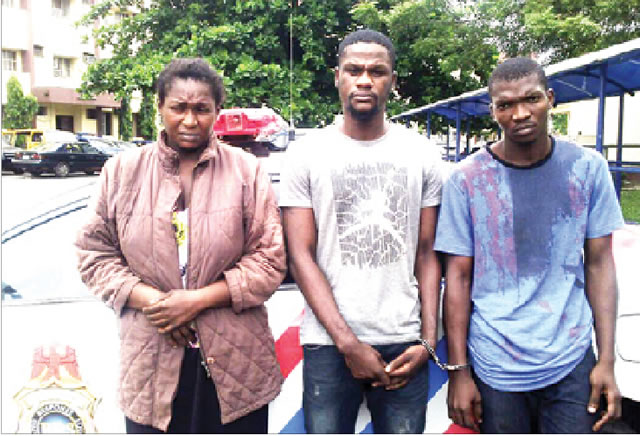 Three suspected Internet fraudsters have been arrested by the Lagos State Police Command for allegedly defrauding an estate agent of about N4m.

PUNCH Metro learnt that the suspects– Olisa Oyegbuka, 28; Ifeannacho Kingsley, 27; and Ujumwa Aniemena, 33–had allegedly hacked into the email of an unnamed client of the estate agent.

They allegedly sent a message from the email to the agent, demanding the transfer of funds kept for the client by the estate agent into some accounts.

The fraud was later discovered after the owner of the account received alerts and subsequently called the agent to demand explanation for the flight of funds from his account.

The case was reported to operatives of the Rapid Response Squad which launched a manhunt for the suspects.

Our correspondent gathered that the three suspects were arrested in Awka, Anambra State.

It was learnt that the suspects were part of a syndicate that specialised in hacking into email addresses and using them to send messages seeking transfer of funds in tranches to different accounts.

The estate agent, who did not want to be identified, said, “The owner of the email account is my client. I received an email giving instruction to transfer funds in my custody to an account belonging to one Emmanuel Ajinubi.

“On November 1, 2016, I transferred N720,000 to another account belonging to one Ifenancho Kingsley.

“I received further instruction the following day to pay N850,000 to the same account. The total amount transferred to the two accounts was N3, 820,000.

“On November 2, 2016, my client called me and that was when we realised that the payment instructions did not emanate from him; rather, they were from fraudsters.”

One of the suspects, Kingsley, admitted that two separate transactions of N720,000 and N850,000 were paid to his account.

He, however, explained that a family friend, Chinedu Emmanuel, had requested his account details and took his Automated Teller Machine card and Personal Identification Number to withdraw the money.

“The first alert of N720, 000 that I got on my phone was withdrawn from my account within a twinkling of an eye.

“The following day, I got another alert of N850,000. And almost instantly, there were lots of POS transactions bearing ‘Grand POS’ Asaba. Since then, I have not seen him and I don’t know the kind of job he does. As I talk to you, my ATM card is still with him,” he added.

Another suspect, Oyegbuka, said his friend, Egbuka, who was arrested by the RRS a few weeks earlier, used his (Oyegbuka) account to transfer N800,000 to another account belonging to one Tamino.

RRS investigators said efforts were on to arrest fleeing members of the gang.

The Police Public Relations Officer, SP Dolapo Badmos, warned criminals using other states as a base to perpetrate crime in Lagos that the command would get them from their hideouts.

“The three suspects have been transferred to the State Criminal Investigation and Intelligence Department for further investigations,” she added.

Posted by Unknown at 12:04 pm
Email ThisBlogThis!Share to TwitterShare to FacebookShare to Pinterest
Labels: Crime