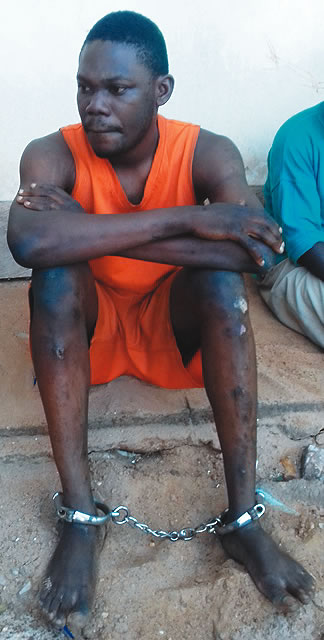 An armed robbery suspect, Saheed Olanrewaju, on Wednesday said a friend of his taught him how to rob because he was about to die of hunger.

According to the 39-year-old suspect, his friend, a man he called “SV” introduced him to the life of crime he led until he was nabbed by officers of the Kwara State Police Command, to “save him”.

Olanrewaju, a native of Sagamu, was paraded by the Commissioner of Police in the state, Mr.Olusola Amore, in Ilorin, the Kwara State capital.

“I met SV in Taiwo area in Ilorin when he taught me how to rob. I regret my action now, but it was hunger that turned me into a robber. I had been starving for long and I realised robbery was the only source of daily bread at the time. If I am eventually freed today, I will never venture into crime again,” Olanrewaju said.

The CP said one of the victims of Olanrewaju’s gang, one Abdulateef Abolaji, was sleeping at home with his family at Budo area of Italepa in Ilorin, when he was attacked.

Amore said the robbers dispossessed Abolaji and others in the house of cash, mobile phones and jewellery. But an investigation into the attack later led the Special  Anti-Robbery Squad of the command to the arrest of Olanrewaju.

Amore said one locally made pistol was recovered from the suspect, noting that efforts were on to arrest Olanrewaju’s accomplices who are at large. He added that the suspects would be charged to court on completion of investigations.

Posted by Lawrencia at 10:09 am
Email ThisBlogThis!Share to TwitterShare to FacebookShare to Pinterest
Labels: Crime