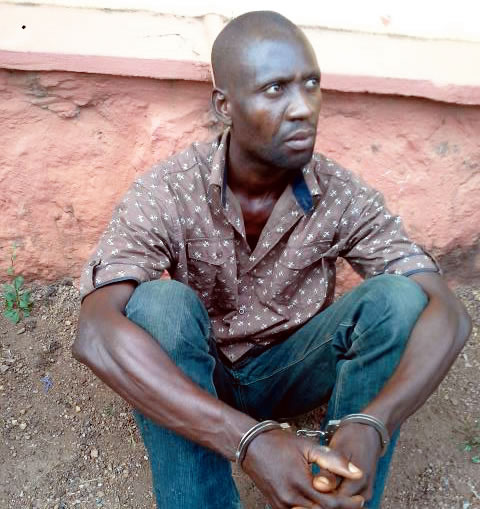 A 33-year-old man, Segun Ogunlusi, who allegedly killed his mother, Abimbola Ogunlusi, on Tuesday, December 13, 2016, says he killed her because she persistently asked him for sex.

The suspect was paraded at the Ogun State Police Command headquarters, Eleweran, Abeokuta, on Tuesday by the state Commissioner of Police, Ahmed Iliyasu.

Also paraded were 23 other suspects who were held for alleged robbery, stealing, cultism, and kidnapping.

PUNCH Metro had reported that Segun had killed his mother and had dumped the corpse in a soakaway on Oketunde Street, Molatori, Ogijo, in the Sagamu Local Government Area of the state.

Segun told PUNCH Metro that he was provoked by his mother’s alleged incessant sex demand, saying that he could no longer endure it.

He said, “I killed my mother because she had been demanding sex persistently from me.

“She said if I had sex with her, I would be free. On a particular Tuesday, two of us were at home; she was in the kitchen when I walked up to her, stabbed her in the stomach and she died.

Segun, who looked remorseful, said he regretted his action.

“I regret everything I did,” he said.

The suspects, Yusuf Dosumu, the ring leader; Moruf Karounwi, Bello Jamiu and Tayo Akinsanya, were reportedly nabbed in Ogijo, in the Sagamu LGA by the men of the Special Anti-Robbery Squad on Wednesday, December 14.

Iliyasu said the gang was responsible for the death of more than 20 people in the area.

He said weapons recovered from the gang included one Baretta pistol loaded with one live ammunition, one locally-made cut-to-size single-barrelled gun and four expended cartridges.

Dosumu, however, denied ever killing anybody.

Five suspected robbers, who allegedly gang-raped a lady on Abiola Way, Abeokuta, on Sunday, November 11, 2016, and dispossessed her of a mobile phone and N55,000, were also paraded.

Three other suspected robbers, who invaded the Awa-Ijebu office of the China Civil Engineering Construction Corporation, were also paraded.

A member of a gang of robbers who robbed a resident of Ijebu Ife of N400,000, was also paraded. The suspect name was given as Adekoya Adesoye.

Two others, who were caught for alleged theft of a Lexus L-300 – Ifeoluwa Monday and John Edesiri – were equally paraded. The suspects were said to have been arrested on Monday, December 5, 2016, while taking the car to Delta State for sale.

A member of a kidnapping ring in Abeokuta, Okeleye Opeyemi, was also paraded. The suspect and other fleeing members of the gang, had allegedly kidnapped one Seun Osagie and locked up the victim in an uncompleted building in Osara village, Obantoko, Abeokuta.

The victim was reportedly freed by policemen on Sunday, December 11, 2016.

Meanwhile, Iliyasu warned against the use of explosives, such as bangers, during the Yuletide, adding that the law banning their use was still in force.

He also warned those planning carnivals to do everything within the armbits of the law.

He said, “Anybody who blocks the road or makes any road inaccessible to its users, and forcefully demands money or any item from members of the public will be treated like an armed robber.”

Posted by Lawrencia at 12:11 pm
Email ThisBlogThis!Share to TwitterShare to FacebookShare to Pinterest
Labels: Crime