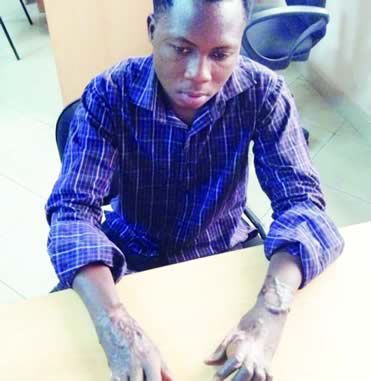 A 26-year-old man, Oluwasegun Ayoola, has lost the use of his two hands after he was allegedly tortured by a herbalist in the Oke-Aro area of Lagos State.

PUNCH Metro learnt that the unidentified herbalist, who is still at large, tied the victim’s hands and feet and dumped him in a clay pot for three days without food.

The victim was said to have been released after some family members intervened. He was subsequently taken to a hospital for treatment.

Oluwasegun was cleaning up his apartment on Idimu Road, Ejigbo, when he collapsed and was taken to the herbalist’s shrine by a half-brother, Afolabi.

His mother, Mrs. Kudirat Ayoola, said she never knew they were being taken to a shrine on the day of the incident.

She said, “My son lives in his late father’s house in Ejigbo; I don’t stay with him. On April 30, 2016, I was called that he had collapsed in the house. My stepson, Afolabi, and a stepdaughter told me to join them because they were taking him for treatment. I never knew it was a herbalist’s house they were taking us to.

“When we got to Oke-Aro, they handed us over to a herbalist. I protested, but they said it was for the improvement of his health. They dropped us off and left.

“On the following day, the herbalist poured palm oil around my son with candles and some fetish items. He asked my son to kneel down while I should be praying. He brought out a knife and a divination tablet. He said my son had become his meat.

“We were alarmed and my son started struggling with him. I screamed for help. They started fighting and my son headbutt the man. Some of the herbalist’s associates came and beat up my son. They tied him up and dumped him in a clay pot. He was there for three days.”

She added that efforts to locate a police station in the neighbourhood to report the incident proved abortive, adding that her relatives later came to free the victim.

Oluwasegun said the incident had left him disable, saying he depended on his mother for almost everything.

He said, “When I left the herbalist’s place, I went to a police station in Agege to report the incident, but the policeman I met at the counter didn’t attend to me because my hands stank and flies were buzzing over my injuries.

“I later saw a police patrol van, which called an ambulance. I was given some treatment and taken back to the house. But my condition has not improved. I depend on my mother to go to the toilet, wear my clothes and even eat. I can’t do anything by myself.”

However, Afolabi, the victim’s half-brother, denied any complicity in the matter, saying he only joined other family members to save Oluwasegun.

He said, “I was not around when he collapsed. But we discovered he had lost his mind when he came round. When the mental illness was getting out of hand, we arranged and took him to the herbalist’s place at Oke-Aro.

“I was not there when he was tied up, but I learnt that he struggled with the man, scattered his house and injured him.  We took him to the herbalist’s house for care. We had spent a lot of money over him, I don’t have any more money to spend.”

It was learnt that Oluwasegun’s late father married three wives and had property in different parts of Lagos State.

His mother was said to be the third wife of the deceased, while he was the woman’s only son.

PUNCH Metro learnt that the case had been taken up by the Lagos State Office of the Public Defender.

The Public Affairs Officer of the OPD, Mr. Adeoba Adeniji-Adele, who confirmed the incident, said the agency was still studying the case.

He said, “Spiritualists are not neurologist or certified physicians, so people have to be wary of them in medical matters.

“The first port of call in this case should have been a hospital for proper diagnosis. Instead, he was taken to a place where his treatment got out of hand. We are still studying the case and appropriate action will be taken in due course.”

Posted by Lawrencia at 11:30 am
Email ThisBlogThis!Share to TwitterShare to FacebookShare to Pinterest
Labels: Crime