Nobody Forced Me To Concede Defeat To Buhari — Jonathan 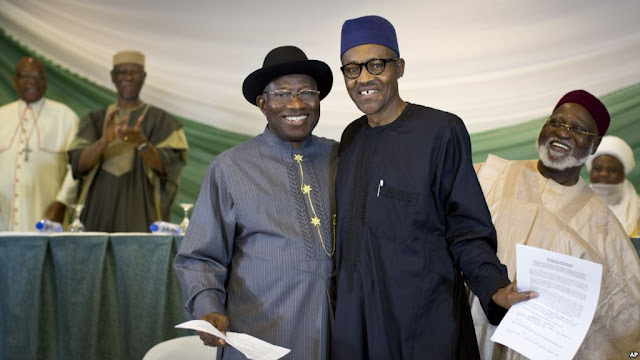 Former President Goodluck Jonathan on Saturday said nobody convinced him to concede defeat to President Muhammadu Buhari after the 2015 presidential poll.

Jonathan, who spoke at the 4th, 8th and 2nd combined convocation and 10th anniversary of Bingham University, Nasarawa State, stressed that he willingly relinquished power because no blood of any Nigerian was worth his political ambition.

The former president and an ex-military Head of State, Gen. Yakubu Gowon (retd.), were honoured with a Doctor of Letters by the university on Saturday.

While delivering his speech, Jonathan said, “The single act (of conceding defeat) I displayed has already begun having effects on global politics as world leaders now willingly concede defeat to their opponents when they lose elections.

“Let me make it very clear, nobody within or outside the country persuaded me to do that. I know it is the right thing to do. My ambition is not worth the blood of Nigerians. It was not just a political slogan.”

The former President said the current economic challenges were temporary, adding that the country would overcome them with the help of its citizens.

Jonathan said he convened the 2014 National Conference to unite the country and prevent the tension and crisis in the polity.

He said, “One of the reasons why I convened the 2014 National Conference was to come up with a polity devoid of tensions and crisis, a polity that will bring unity to this country, one that will not divide us along tribal, ethnic, and religious line.

“It is my belief that no one’s political ambition is worth the blood of any Nigerian and I am fulfilled knowing that conceding defeat, while the votes were still being compiled, was borne out of my personal principle and conviction generating positive impact on other nations.”

He added, “I have seen politicians, whose children study and live abroad, mobilise children of others as thugs during elections. They don’t care whether they die or not. This is against human dignity.  We should fulfil our vows as a nation of great people who love and respect one another.”

Posted by Lawrencia at 10:34 am
Email ThisBlogThis!Share to TwitterShare to FacebookShare to Pinterest
Labels: NationalNews