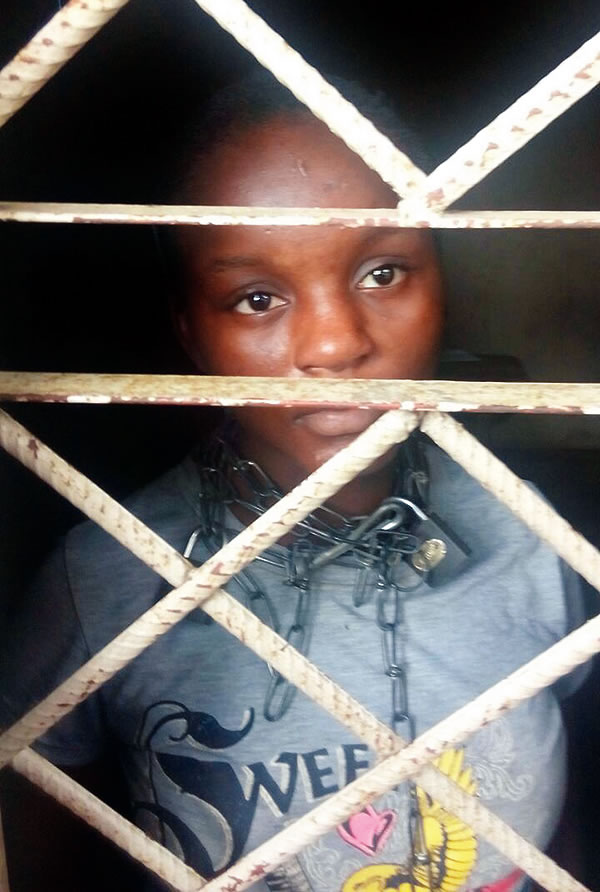 A teenage girl, identified as Onyeka John, has regained freedom after she was allegedly chained by her mother to the burglar-proof bars for about one month.

The girl lived with her parents in a rented apartment on Serebe Street, Abaranje, in the Ikotun area of Lagos State.

The parents reportedly tied up John by the neck and legs for habitually running away from home, which they ascribed to mental illness.

PUNCH Metro learnt that the parents had gone out on Wednesday and locked up the girl as usual.

On that day, the landlord, Mr. Oladapo Olubajo, was said to have gone to the backyard, where the family’s apartment is located, to check a pumping machine when he saw the girl.

The landlord was said to have alerted a resident, who reported the case to the police at the Ikotun division.

The resident, who begged not to be named, said the girl’s parents eventually showed up at the police station and made statements.

He said, “The parents locked the girl up. She is about 14 years old. She was chained naked to the burglary inside the room by the neck and legs.  Policemen came to rescue the girl. Her parents later turned themselves in at the station. They said the girl had been a disgrace to the family.”

The landlord, Olubajo, told our correspondent that he wanted to take up the matter with the parents, but some residents prevailed on him not to.

He explained that he met the girl naked in the apartment, adding that the condition she was could frustrate her to commit suicide.

Olubajo said, “When I saw her chained to the burglar-proof  bar, I raised the alarm. The police later got the parents to the station and interrogated them.

“The girl said she had been there for almost one month. Her parents moved here a year ago. I have noticed that their behaviour was odd. but I didn’t know they could go to the extent of chaining the ir daughter.

“People begged me and the police eventually released the girl to them yesterday (Wednesday). The conclusion we reached is that I want them out of my house. They also claimed the girl is mentally ill. Even if she is mentally challenged, was that the right way to go about it? She could have killed herself.”

Onyeka’s father, who spoke with PUNCH Metro on the telephone on Thursday, said he and his wife meant no harm for the girl.

He said, “She always runs away from home. That was why we chained her. I think she is mentally ill. We planned to take her to a hospital this month. As I speak now, she has fled home again.”

“The lady is suffering from mental illness. Her parents chained her to prevent her from entering the street, and without intention to harm her,” she added.

Posted by Lawrencia at 11:21 am
Email ThisBlogThis!Share to TwitterShare to FacebookShare to Pinterest
Labels: Crime