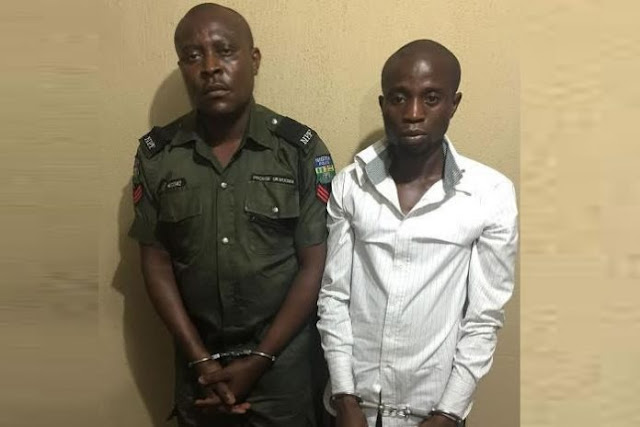 THE Rivers State Police Command has confirmed the arrest of one Sergeant Promise Ukwuoma and an employee of Access Bank, Rumuolumeni Branch, Samuel Ndudiri, identified as members of a criminal gang who attempted to rob the bank.

The policeman and the bank worker were said to have been apprehended after a discreet investigation by operatives of the Intelligence Response Team with assistance from the Technical Intelligence Unit of the Nigeria Police.

According to an online statement, which was confirmed by the State Police Public Relations Officers, Mr. Nnamdi Omoni, the duo, were arrested at about 11.35 hours on Friday.

It will be recalled that operatives of the Command on Thursday foiled what would have been a major bank robbery in the state and arrested three suspects.

The three suspects and others on the run had brought a filled gas cylinder to the Access Bank premises in Rumuolumeni and had engaged in cutting the main door leading to the bank when security operatives stormed the place.

However, some members of the gang, including a police corporal, Gabriel Igwe, of the 19 Police Mobile Force, are currently on the run, while two AK 47 rifles belonging to the serving police personnel were recovered during Friday’s operation.

Ndudiri, the Access Bank employee, was said to have masterminded the failed robbery of the bank with the assistance of the police sergeant, who is from the Department of Operations, Port Harcourt.

“Arrest of a serving Police Sergeant and bank staff involved in bank robbery and recovery of two AK47 rifles belonging to serving personnel on 23/12/2016 at about 1135hrs.

“Sergeant Promise Ukwuoma of DOPS Port Harcourt and Mr. Samuel Ndudiri ‘m’, 38 years, a staff of Access Bank, Eagle Cement (Rumuolumeni) branch, who brought the job and masterminded the robbery were both arrested in Port Harcourt.

Igwe, according to the statement, left the rifle at his beat and escaped when he got information that his gang member, Sergeant Promise Ukwuoma, had been arrested.

The arrested suspects were said to have confessed to the crime, even as the police maintained that efforts were in top gear to ensure the arrest of the fleeing members of the gang.

When contacted, the State Police Public Relations Officer confirmed the arrest of the police sergeant and the Access Bank worker, but insisted that he would not make further comment until he got an approval to do so.

“I can confirm to you that the IGP Intelligence Response Team arrested the sergeant and the bank staff, but I cannot say anything further until we get an official approval to do so,” Omoni stressed.

Posted by Unknown at 8:55 pm
Email ThisBlogThis!Share to TwitterShare to FacebookShare to Pinterest
Labels: Crime