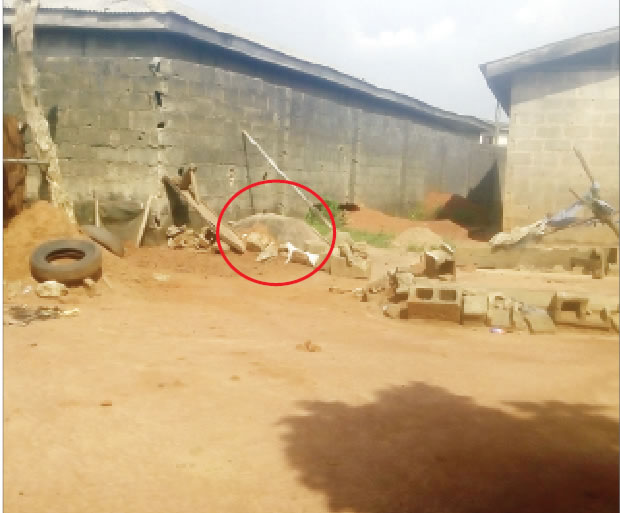 The police in Lagos State have arrested a woman, Mrs. Bosede Adekunle, for allegedly dumping the corpse of her son, Kayode, in a cesspit in the Baruwa area of Ipaja.

PUNCH Metro learnt that the decomposing remains of the 34-year-old were found on Saturday, November 26, five days after he was dumped in the cesspit.

It was gathered that Kayode had been sick for some time and had remained indoors under the care of the widowed mother and two sisters. The victim later gave up the ghost under a circumstance that was not clear.

The mother was reported to have taken the corpse and dumped in the cesspit in the community.

However, the stench from the corpse was said to have caught the attention of a resident who, after searching, found the body and raised the alarm.

Residents were said to have recovered the remains from the cesspit.

A resident, Bode Osas, said a mob attacked the suspect before the intervention of policemen from the Ipaja division who whisked her away to the station.

He said, “The man had epilepsy and he had been sick for some time. He was said to have died last Tuesday night. After he died, she and her two children dumped his corpse in a cesspit behind their house.

“The mistake they, however, made was that they didn’t know that the cesspit was shallow and almost filled up with faeces. The odour of the corpse filled the area and five days after, the body was discovered.”

Another resident, who did not want to be identified, said Kayode died from the sickness, adding that the mother was confused on what to do with his corpse and dumped him in the cesspit.

“She is a widow and she didn’t know what to do when her son died, so she dumped the corpse in the cesspit. There was a lot of crowd in the community when the corpse was discovered. Some people mobbed her before the police intervened,” he added.

Our correspondent learnt that officials of the Ipaja Local Government Area and the State Environmental Health Monitoring Unit were contacted.

The residents were, however, reported to have removed the corpse before the arrival of the government emergency workers.

When our correspondent visited the area, he observed that the victim was buried opposite his mother’s mud house, which was locked up.

The Baale of Ishaga Olaogun community, who did not identify himself, said the suspect had been banished from the community, adding that the case was with the police.

He said, “We don’t want this case to escalate beyond this and that is why I won’t say anything to you. Sanity has been restored to our community and the woman that committed the crime has been banished along with her children. She is in police custody.”

She said, “The decomposing corpse of a man, Kayode Adekunle, was discovered in a cesspit at Adekunle Compound, Baruwa, Ipaja. It was later discovered that the corpse was dumped there by the mother, Mrs. Bosede Adekunle.  Kayode was an epileptic patient and he had fallen sick for some time before he died. Local government health officials were contacted for evacuation, while the case is under investigation.”

Posted by Unknown at 12:45 pm
Email ThisBlogThis!Share to TwitterShare to FacebookShare to Pinterest
Labels: Crime