26-Year-Old Man Arrested For Killing His Wife, After A Minor Disagreement 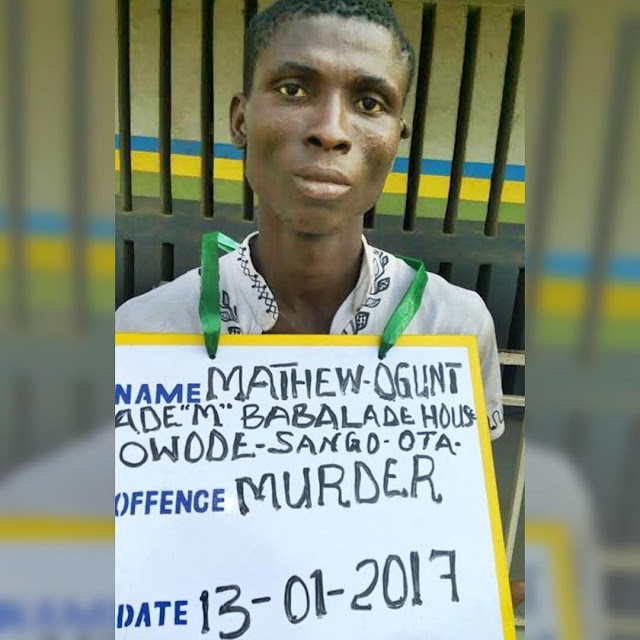 The Ogun State Police Command has arrested a 26-year-old man, Mathew Oguntade, for allegedly killing his 20-year-old wife, Mary Oguntade, during a fight.

The couple lived behind the Anglican Church at Owode-Ijako, in the Ado Odo/Ota Local Government Area of the state.

According to the information by the police, the incident happened on Friday, January 13, 2017 at about midnight when the couple fought after a minor disagreement.

The community development association Chairman of the area, Iskilu Kareem, was said to have reported the case to the police.

He said he received a telephone call from a member of the vigilance group in the area that the husband and wife were engaged in a scuffle, adding that before he got to their house, the husband had strangled his wife, threw the body outside through a window and ran away.

The state Police Public Relations Officer, Abimbola Oyeyemi, said, “The Divisional Police Officer, Sango Police Division, Akinsola Ogunwale, a Superintendent of Police, later led detectives to the scene and took the corpse to the Ifo General Hospital’s mortuary, after which a manhunt was launched for the suspect.”

Oyeyemi, an Assistant Superintendent of Police, said police efforts paid off the following day when the suspect was apprehended and taken into custody.

He said, “The state Commissioner of Police, Ahmed Iliyasu, has directed that the suspect be transferred to the Homicide Section of the State Criminal Investigation and Intelligence Department, Eleweran, Abeokuta, for further investigation.”

Oyeyemi said the police commissioner appealed to members of the public to always alert the police whenever their neighbours were engaging in fisticuffs in order to avert “this kind of ugly incident.”

Posted by Unknown at 11:37 am
Email ThisBlogThis!Share to TwitterShare to FacebookShare to Pinterest
Labels: Gists