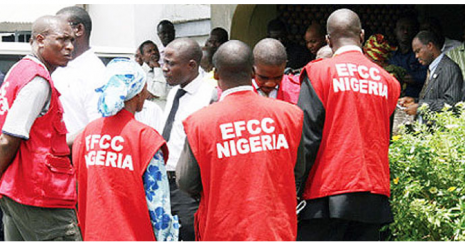 The Economic and Financial Crimes Commission, EFCC, on Friday January 20, 2017 arraigned one Fredrick Ogbueifun before Justice P.A. Ajoku of the Federal High Court, Benin, Edo State on a 33-count charge for alleged abuse of office to the tune of Three Hundred and Sixteen Million Nine Hundred and Seventy One Thousand, One Hundred and forty Six Naira.

The accused who was Acting Managing Director of Uda Community Bank now Uda Microfinance Bank, allegedly raised different over drafts at different times in favour of several account holders above the limit laid down by the law and the bank’s regulation.

He pleaded not guilty to all the counts when they were read to him in court. One of the counts reads:

“that you Fredrick Ogbuifun while being the Acting Managing Director of Uda Community Bank Nigeria Limited (now Uda Microfinance Bank Limited) on or about the 22nd of October 2007 within the jurisdiction of this honourable court did knowingly grant and approved an overdraft in the sum of Three Million, One Hundred and Fifty Thousand, Six Hundred Naira (N3, 150, 000, 600.00)


in favour of Assurance Venture Ltd an account holder with account No. 1210200072 which said sum is above your limit as the Acting Managing Director of the bank as laid down by the law and in accordance with the bank’s regulation and thereby committed an offence contrary to Section 15(1)(a)(b) of the Failed Banks (Recovery of Debt) and Financial Malpractices in Banks Act CAP F2 of the Revised Edition (Laws of the Federation of Nigeria 2007 and punishable under Section 16(1)(a) of the same Act”.

In view of his plea, the prosecution counsel, Sadiq Hussaini asked the court to fix a date for the commencement of trial. However, the defence counsel A.O.O.Ekpu urged the court to grant his client bail with a promise that he will make himself available for trial.

Justice Ajoku adjourned the matter to March 15, 2017 for trial, while the accused person is to be remanded in prison custody pending the perfection of his bail. ...........Joseph Ishiguzo Also Arraigned!

In a similar development, the EFCC on today, Friday arraigned one Joseph Ishiguzo, before Justice J. E. Inyang of the Federal High Court, Owerri, Imo State on a four count charge bordering on conspiracy and obtaining money by false pretense.

The accused pleaded not guilty when the four counts were read to him. In view of his plea, the prosecution counsel, M.T. Iko asked the count to fix a date for trial and to remand the accused person in custody.

The Defence counsel, A. S. Aseluno urged the court to grant his client bail as the offence is bailable. Justice Inyang granted the accused person bail in the sum of N10 million naira or two sureties in like sum.

Posted by Unknown at 4:07 pm
Email ThisBlogThis!Share to TwitterShare to FacebookShare to Pinterest
Labels: Crime