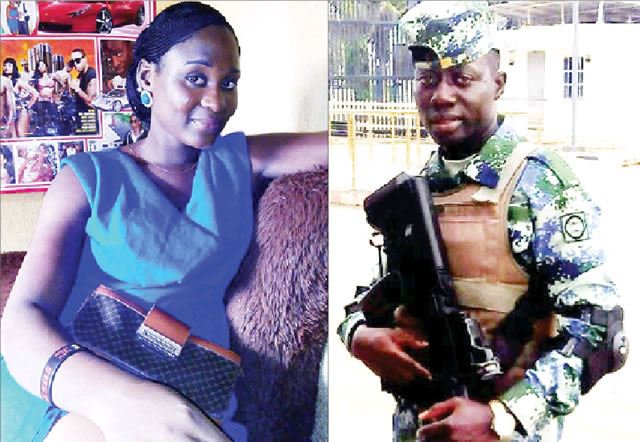 An official of the Western Naval Command, Apapa, Lagos, Omojoye Ayodele, has been arrested by the Lagos State Police Command for allegedly killing his wife, Mary Egbailo.

PUNCH Metro gathered that Ayodele on Tuesday allegedly beat up the victim till she gave up the ghost at their house on Eze Anthony Street, in the Igando, Alimosho area of the state.

The 30-year-old suspect had gone to bring back the wife from the Cherubim and Seraphim Church in the area, where she was said to have been since Sunday.

Shortly after they entered their room-and-parlour apartment, an argument reportedly ensued between them, which led to a fight. The Ebute Irele, Ondo State indigene, allegedly beat his 29-year-old wife till she became weak and died.

She was said to have been rushed to El Dunamis Hospital, a private medical centre in the area, where she was confirmed dead.

An official of the hospital told our correspondent on Wednesday that Egbailo was confirmed dead while in a tricycle that brought her in company with her husband and two women.

The official, who did not want to be identified, said the husband claimed she took a local insecticide, Sniper.

He said, “She was brought around 11.30am in a tricycle. A man, who wore military uniform and claimed to be her husband, was screaming that she took Sniper insecticide.

“Doctors went to check her in the tricycle and it was discovered that she was dead. We immediately asked that she should be transferred to a general hospital. The husband was shouting to the hearing of everybody that she took Sniper.”

PUNCH Metro gathered that the victim would have been taken to her hometown for burial, but for the insistence of the landlady, who maintained that Egbailo did not take Sniper, but was a victim of domestic violence.

The case was said to have been reported at the Igando Police Division, leading to the arrest of Ayodele for allegedly beating the victim to death.

The landlady, who spoke with our correspondent on the condition of anonymity, alleged that Ayodele had been assaulting his wife since 2016.

She explained that on the morning of her death, Egbailo did not show any sign of depression.

She said, “The man complained that for the past three days, his wife had been away from the house and gone to a church.

“Around 10am on Tuesday, both of them entered into the house. I guess he had just gone to pick her from church.

“It was not up to three minutes that I started hearing noise. I went to their apartment and asked the man what the problem was, but he pushed me away and kept hitting her. He dragged her on the floor, among other things.”

She said she ran out to call for help when the beating was excessive.

The landlady claimed that as other residents approached the house to mediate, the suspect threw his wife into the gutter.

“I begged her to wait outside till her husband calm down, but she said she wanted him to kill her,” she added.

She explained that the victim entered the house again and was beaten up until she became weak.

“She could not walk, so I decided to take her to a hospital. But nobody was willing to help me. If we had a vehicle on time, we would have probably saved her life. We were in front of my shop for about one hour, without any help.

“She was still talking to me before she passed out. The last request she made was that she needed palm oil,” she said.

She said after the victim passed out, a tricycle was brought, which then conveyed her to El Dunamis Hospital, where she was confirmed dead by doctors.

She said she decided to report the case to the police to prevent the suspect from escaping justice.

The landlady described her as gentle, saying for the past four years that she lived in the house, she never had a quarrel with her.

“We discussed together and she always shared her challenges with me. When her father came after she died, he kept saying his daughter never told him what was going on in her marriage. She was always covering up for him,” she said.

Our correspondent gathered that in 2011, the couple had a child together, named Israel.

Efforts to have another child were said to have been abortive. The issue was reported to have been responsible for the tension in the family.

Our correspondent observed a motorcycle, which reportedly belonged to Ayodele, in the compound.

The landlady threatened to eject him from the house for allegedly hitting her during the scuffle which led to the death of his wife.

A close friend of the deceased, who did not identify herself, said Egbailo did not give her any impression that she was being assaulted by her husband.

She said the husband told her that Egbailo had been abducted since Sunday when she went to church and was returned by the captors who discovered she was not useful for their money ritual.

She said, “The man said on that Tuesday, they had an argument after which she threatened to kill herself. The man said he joked with her that if she wanted to kill herself she should go ahead. He said in a jiffy, she had taken a bottle of Sniper and drank it. He rushed to my shop to call me that his wife was dying.

“We rushed her to the hospital where she died. It was later I was told she had been a victim of domestic abuse. She had never opened her mouth to tell me anything like that.”

“From the information available to me, the woman in question allegedly drank Sniper,” she said.

The Police Public Relations Officer, SP Dolapo Badmos, said the corpse had been deposited in a mortuary for autopsy.

She said, “We received a report that a naval rating fought his wife and she slumped and was rushed to El Dunamis Hospital, where the doctors confirmed her dead. The corpse was deposited in the Mainland General Hospital mortuary for autopsy. The case is under investigation.”

Posted by Unknown at 11:31 am
Email ThisBlogThis!Share to TwitterShare to FacebookShare to Pinterest
Labels: Crime