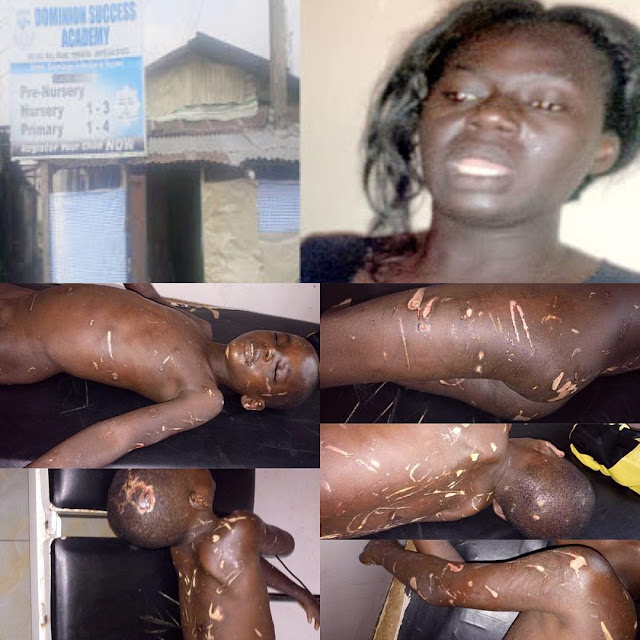 Mrs. Erueke John, the biological mother of late Joshua Zikeme, the seven-year-old boy, who was allegedly tortured to death at Akaba community in Yenagoa Local Government Area of Bayelsa State by his father and step-mother over allegation of witchcraft, yesterday, cried out that her son was a victim of a vicious father and not a wizard.

Mrs. John claimed that the allegation of wizardry by the suspects was based on a revelation from a church based in Yenagoa.

According to her, “the church is a one room place of worship. They claimed they took my son to the place and they were told he was a wizard.”

She said her son was tied to a stake and savagely brutalised to death. The police had, Monday, arrested the deceased boy’s father, Idiesy Zikeme, and the step-mother, Eunice Zikeme, on suspicion of torturing the boy to death.

The suspects, it was gathered, are to be transferred to the homicide section of the state Police Command for further interrogation.

The deceased, according to security sources, was rushed to the Federal Medical Centre, FMC, dead with several bruises on his body, a development that raised the suspicion of the management, who promptly alerted the police, leading to the couple’s arrest.

The photograph of the lacerated body of the deceased, a Nursery 3 pupil of Dominion Success Academy on Oil Mill Road, Yenagoa, sparked anger in the state capital with residents calling on the state government and the Federation of Women Lawyers to intervene and ensure the proper prosecution of the suspects.

Speaking yesterday, the 29-year-old biological mother of the deceased, Mrs. Erueke John, said though the boy was stubborn, he never displayed any sign of wizardry as alleged by the suspects.

She said: “They killed my son in cold blood. I was told the suspects used sharp objects to slice all parts of his body in an attempt to exorcise him.

“I left the father’s house while I was pregnant with the boy, because he was beating me and was also into illegal sales of hard drugs.

“If he had come alone to seek the child’s custody, I would have objected because he is too violent. But the step-mother pleaded and I agreed. Many people, including the aunty in school, warned me but I allowed them take the child. And they have killed him for me.”

When Vanguard visited the deceased school, Dominion Success Academy, the pupils were shocked on hearing news of the boy’s death.

The proprietress of the school, Mrs. Julianna Isaac, said: “We are shocked at the death of the boy. That a child showed signs of stubbornness does not make him a wizard and be killed in cold blood. We know him and we even missed him during the last exams.”

Posted by Unknown at 5:19 pm
Email ThisBlogThis!Share to TwitterShare to FacebookShare to Pinterest
Labels: Crime