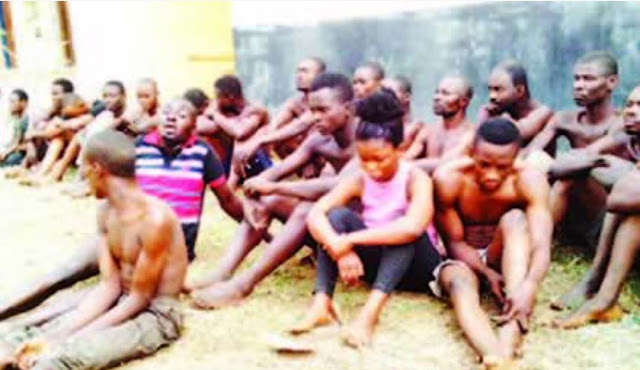 The Police  in Ekiti State have arrested a student of College of Health Technology, Ijero Ekiti, Busayo Kayode, who allegedly took her bossom friend to be gang-raped by 10 suspected cult members in a bush on the school premises.

The police said Kayode, who is a member of AVE (Act Very Effective) cult, was in charge of recruiting female students of the institution. According to a detective, who pleaded not to be named, part of the initiation process is that female students are blindfolded and gang-raped by cult members.

“They are thereafter warned to shut their mouth as initiates or risk losing their lives. But the last victim defied the threat and reported to her parents who informed the police, which led to the arrest of three of the cult members,” he added.

A source in the school said many female students had suffered similar fate, but kept their mouths shut to avoid stigmatisation.

Kayode and three of the suspected rapists were among the 26 suspects paraded on Wednesday by the Commissioner of Police in Ekiti, Wilson Inalegwu.

The CP said the command also arrested a man, Olalekan Ezekiel, for allegedly parading himself as a police inspector.

According to him, Ezekiel was arrested on February 20 on Esure-Awo road, Igede, by a patrol team and later confessed to the crime.

He said one unregistered red Honda motorcycle was recovered from the suspects.

The CP said the police also arrested six persons in Kano and Kaduna states in connection with the killing of the police paymaster in Ekiti, Mr. Idowu Taiwo, and one Kunle Enisan, as well as the kidnap of a Turkey-based Emmanuel Adeleke.

He said, “The operatives successfully recovered a Samsung Galaxy Note 4, Motorola Android Phone and BlackBerry Passport belonging to the late OC MSS . Also, Infinix and Itel phones belonging to the waitresses working at a joint where the late officer was abducted before being killed were recovered.”

The Police Commissioner added that he had established a squad to smash criminal hideouts in the Atikankan, Adebayo, Ajilosun and Ojumose areas of Ado Ekiti.

Inalegwu disclosed that the command was partnering sister commands in Ondo, Kwara, Kogi and Osun States to curtail activities of kidnappers in the zone.

He said his men were also mapping thick forests in the Ikere-Igbara Odo-Ogotun and Ise-Emure areas, where kidnap victims were being regularly kept in the state, to reduce the “nefarious act.”

“We are also enlisting the services of local hunters and vigilante groups for constant patrol of the forests, so that when we occupy their hideouts, they will have no option than to run,” he said.

On herdsmen, Inalegwu said, “We are working to ensure peaceful co-existence among herdsmen and farmers.

“Also, the cult members who gang-raped a student and their accomplice would be charged to court.”

Posted by Unknown at 11:05 am
Email ThisBlogThis!Share to TwitterShare to FacebookShare to Pinterest
Labels: Crime