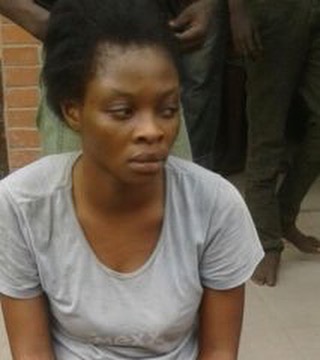 A four-month-old baby has been recovered from the Oshodi under bridge shortly after he was dumped by his mother, Timileyin Adesina. The mother was arrested by operatives of the Lagos State Task Force on Environmental and Special Offences (Enforcement) Unit, who recovered the baby from a sack under the bridge.

It was learnt that the men were on a raid to dislodge commercial buses causing obstruction on highways in the area when one of them saw Adesina dumping the child. The official was said to have walked down to the spot and found the baby naked in the bag while the mother had fled.

“The streetlights around the bridge exposed the woman. The officer spotted from distance that someone dropped a bag and started running. He quickly moved towards the bag and when he saw that it was a baby that was packaged inside it, he chased the woman and arrested her,” a source told our correspondent.

Eighteen-year-old Adesina was said to have told investigators that her mother sent her and the baby out as she could not identify the baby’s father.

She said, “I dropped out from school out of poverty while in JSS 2. I was living with my mother at 26, Coker Street, Ejigbo, Lagos and my father died nine years ago.

“My mother sent me out because I gave birth and could not identify the man who impregnated me as different men slept with me.”

The task force Chairman, SP Olayinka Egbeyemi, who confirmed the incident, said the mother disclosed that she took the action as she could no longer take care of the baby.

Egbeyemi in a statement by the agency’s spokesperson, Taofiq Adebayo, said, “The mother of the baby was arrested by an official of the agency while running away after she had dumped the baby boy at under bridge, Oshodi.

“After interrogation, the woman confessed that she dumped the baby because she could no longer take care of him as none of her family members was ready to accommodate her with the baby.”

The Lagos State Commissioner of Police, Fatai Owoseni, after being briefed about the incident, was said to have directed that both the rescued baby and his mother be immediately transferred to Social Welfare Department of the Lagos State Ministry of Youths and Social Development.

Posted by Lawrencia at 10:04 am
Email ThisBlogThis!Share to TwitterShare to FacebookShare to Pinterest
Labels: Crime