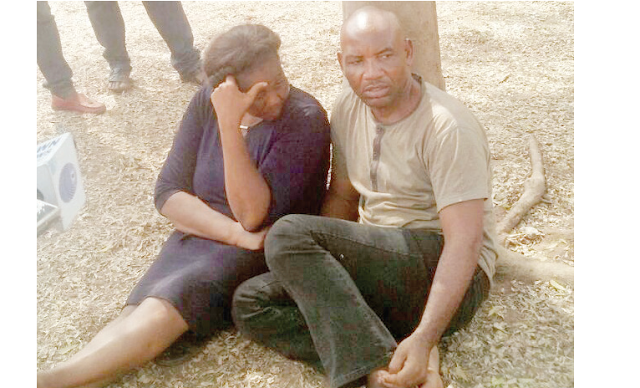 Police in Delta State have arrested a 43-year-old Ngozi Ojei and Ewere Samuel (20) for selling a two-week-old baby girl to a widow for N600,000. Samuel is the mother of the baby. Samuel gave birth to the baby girl while she was Ojei’s housemaid in Aba, Abia State.

But because Samuel could not identify the person who impregnated her, she and Ojei agreed to sell the baby to avoid keeping a bastard child. They sold the baby late January to a woman simply identified as a widow. Parading them alongside suspected armed robbers, kidnappers and traffickers at the command headquarters in Asaba yesterday, the Commissioner of Police, Zanna Ibrahim, said in November 2016, Ojei asked Loveth Ojie to help her get a housemaid before she brought Samuel.

“In January 2017, the said Ngozi Ojie came to Ekwuoma (in Ika North East Local Government Area of Delta State) to see the mother of Ewere Samuel after which she took her to Aba. “The said Ewere Samuel delivered a baby girl and the suspect sold the child.

The suspect confessed selling the baby for N600,000,” the commissioner explained. But Ojei said she and the mother of the baby girl got N250,000 each from the proceeds. While Ibrahim said investigation was ongoing, Ojei’s husband, Mr. Edwin Ojei (50), of No. 22, MCC Osisioma Ngwa, Abia State, who was paraded alongside his wife, said: “I only came home for burial when I was arrested.”

Posted by Unknown at 11:17 am
Email ThisBlogThis!Share to TwitterShare to FacebookShare to Pinterest
Labels: Crime