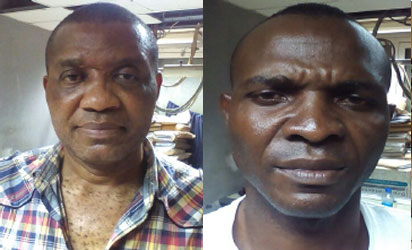 A 53-year-old shoe merchant, Lekwauwa Mark Otaka, who was arrested at Nnamdi Azikiwe International Airport, Abuja, few hours to its closure, Wednesday, has disclosed that he inserted 386 grammes of cocaine into his anus over a promise of N1 million to traffic the drugs to Cambodia.

Arrested alongside the father of three was 57-year-old Odogwu Augustine Ike, an automobile dealer in Onitsha, Anambra State.

Ike was arrested with 2.150kg of heroin from Tanzania. The agency’s Commander at the Abuja Airport, Hamisu Lawan, explained that the duo tested positive for narcotic ingestion during routine screening.

According to him, “Odogwu Augustine Ike was caught with 110 wraps of heroin weighing 2.150kg from Tanzania on an Ethiopian Airline flight, while Otaka was found to have inserted seven wraps of cocaine weighing 386 grammes into his anus on an Egypt Airline flight to Cambodia. Both suspects are currently under investigation.”

‘I was afraid of swallowing’

During interrogation, Otaka, an Aba-based shoe merchant, said: “I was afraid of swallowing the drugs so I chose the insertion method. I inserted 386 grammes of cocaine into my anus in my desperation to get N1 million promised.”

On his part, Ike, said to have excreted 110 wraps of heroin, revealed that he was promised N600,000 to smuggle the drug. The father of four, who hails from Anambra State, blamed his action on financial hardship.

Commenting on the arrest, the Chairman/Chief Executive of the agency, Col. Muhammad Abdallah (rtd.) assured on strict narcotics screening at the alternative Kaduna Airport.

This, he said, would help in preventing illicit movement of narcotics by drug cartels, informing that the Agency had taken measures at ensuring comprehensive examination of passengers and goods at the Kaduna Airport.

Posted by Unknown at 11:16 am
Email ThisBlogThis!Share to TwitterShare to FacebookShare to Pinterest
Labels: Crime