Court Strikes Out Six Charges Against Nnamdi Kanu, Due To Lack Of Evidence 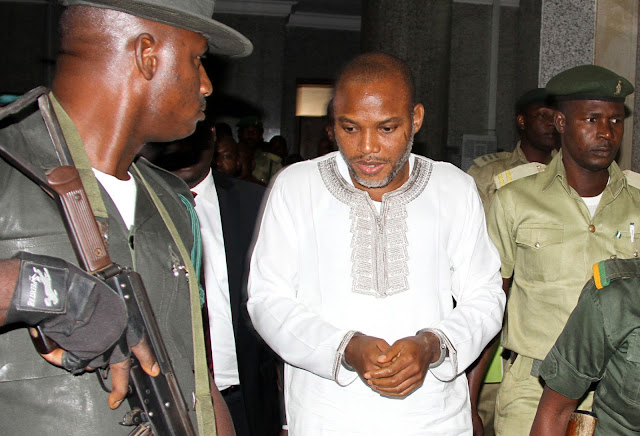 A Federal High Court in Abuja on Wednesday struck out six out of the 11 charges instituted against the leader of Indigenous People of Biafra, Nnamdi Kanu, and other persons.

Justice Binta Nyako, struck out the charges as she upheld part of the preliminary objection filed by three of the four defendants in her ruling on Wednesday. According to the judge, the struck out charges did not call for trial due to lack of evidence in the proof of evidence filed by the prosecution.

The accused persons charged along with Kanu were the National Coordinator of IPOB member, Mr. Chidiebere Onwudiwe, Benjamin Madubugwu and David Nwawuisi.

But ruling on the applications by Kanu and two other accused persons on Wednesday, Justice Nyako held that six of the 11 charges disclosed no prima facie cases and the elements of offences supposedly preferred against the defendants.

The struck out charges contained in Counts 3, 5, 7, and 10, related to management of unlawful organisation, intention to manufacture bomb, improper importation of a radio transmitter.

The judge, in striking out the charge of management of unlawful organisation held that the prosecution had failed to show that IPOB was either unlawful, unregistered or had been proscribed.

Posted by Unknown at 12:32 pm
Email ThisBlogThis!Share to TwitterShare to FacebookShare to Pinterest
Labels: NationalNews