Photo: Doctor Receives Call, Jumps Into Lagoon While Coming From Church In A Nissan SUV 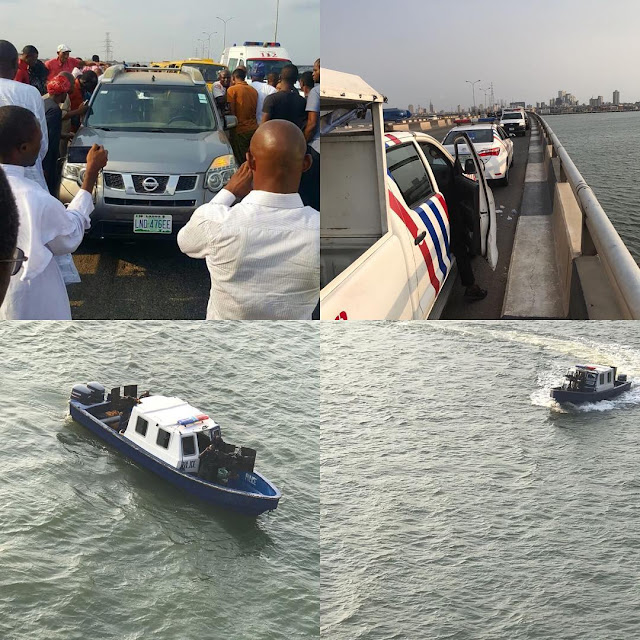 Officials of the Lagos State Emergency Management Agency on Sunday searched for a medical doctor, who jumped into a lagoon on the Third Mainland Bridge, in the Adekunle area of Lagos State.

It was learnt that the man, identified simply as Dr Allwell Orji, was in a Sport Utility Vehicle en route to Lagos Island at about 4pm on Sunday when he asked his driver to stop after he allegedly received a call.

He was said to have walked to the railings on the bridge and jumped into the lagoon.

PUNCH Metro gathered that the vehicle and the deceased’s driver were taken to the Adeniji Adele Police Division, while efforts were ongoing to find the doctor “dead or alive” as of 8pm on Sunday.

An Instagram user, who claimed to have witnessed the moment Orji jumped into the lagoon expressed shock over the incident.

“I witnessed the worst thing ever today! The owner of this particular vehicle jumped into the lagoon right in front of me! I saw him get out of his car; then jumped. I was directly behind him. I parked and ran as fast as my legs could carry me, but it was too late. I wish he had waited a little longer, I wish I was able to stop him, I wish I was about to hold his hands, I wish he could tell me what the problem was!

“I’m still in shock, I couldn’t control my tears. I ran after him, I tried to save him, I called for help….Loads of people stopped because they saw me acting like a crazy woman, the ambulance was present, the fishermen were trying to help, but it was too late! He left a note on his personalised doctor’s notepad with his house address,” the user wrote.

The LASEMA General Manager, Mr. Adesina Tiamiyu, who confirmed the incident, said some local divers and men of the agency were still searching for the victim in the lagoon.

He said, “The man parked his grey coloured Nissan SUV with number plate, LND 476 EE, at about 4.50pm on the Third Mainland Bridge, and jumped into the Lagos Lagoon.

“Preliminary investigation revealed that the man, Orji, who was being driven by his driver, suddenly ordered the driver to pull over.

“He alighted from the SUV and jumped into the lagoon from the bridge.

“The vehicle and the driver have been taken to the Adeniji Adele Police Station.

“Effort is ongoing to find him or recover his body from the lagoon.”

The Zone 2 spokesperson, SP Dolapo Badmos, said the marine police joined the Lagos command to search for the victim.

“The mother and a pastor have come to identify him,” she added.

Posted by Lawrencia at 9:28 am
Email ThisBlogThis!Share to TwitterShare to FacebookShare to Pinterest
Labels: NationalNews