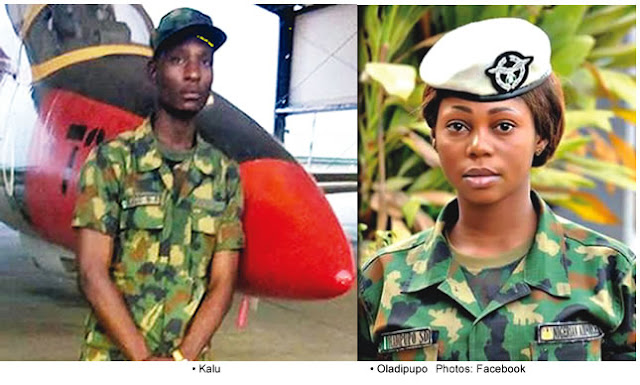 A personnel of the Nigerian Air Force, Kalu B.A, has allegedly shot one of his colleagues and his purported girlfriend, Oladipupo Solape, dead in a fit of rage and jealousy.

The incident happened on Saturday at the NAF Tactical Air Command, Makurdi, Benue State. It was learnt that the lady, popularly referred to as Shomzy, who hailed from Badagry, Lagos State, was on Saturday allegedly shot dead by Kalu after the latter accused her of dating other men.

After the killing, it was speculated that Kalu also shot himself because of his post on his Facebook page, which read, “My last night as an airman. Ask about me later and hear my story, you will be surprised.”

It was, however, learnt that Kalu had been arrested and in military detention. The NAF Director of Public Relations and Information, Group Captain Ayodele Famuyiwa, said investigations were ongoing into the matter to ascertain the motives of the suspect.

He said, “She was initially rushed to NAF hospital, but when it was beyond their control, she was transferred to the state hospital where she died. Kalu has been arrested. Investigations are ongoing into the incident. We will unravel the circumstances that led to the incident.”

Posted by Unknown at 10:01 am
Email ThisBlogThis!Share to TwitterShare to FacebookShare to Pinterest
Labels: Crime