Pregnant Housewife Stabs Husband To Death Over His Love For Gambling 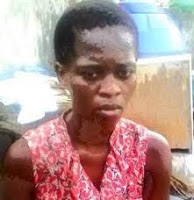 A 29-year-old housewife, Onyinyechi Akunne, who allegedly killed her 35-year-old husband, Abuchi Akunne, with a kitchen knife over a lottery ticket of Premier Lotto Ltd also known as “Baba Ijebu”,was on Monday brought before an Ikeja High Court.

Onyinyechi is facing a charge of murder which contravenes Section 221 of the Criminal Law of Lagos State 2011. She, however, denied the charge. The State Prosecutor, Mrs C.K Tuiyi-Carena, told the court that the accused allegedly committed the offence on March 28, 2015 at her residence located at No. 85, Idimu Road, Ejigbo, a surbub of Lagos.

“On the day of the alleged murder, Onyinyechi was preparing a meal while Abuchi was sitting on a chair in their home looking at his ‘Baba Ijebu’ lottery tickets.

“Angered by her husband’s action, Onyinyechi scolded him for his love for gambling and a fight ensued between them.

“She took the kitchen knife she was using to cut vegetables and stabbed her husband fatally in the chest.

“The stabbing inflicted a deep cut in Abuchi’s chest which led to excessive blood loss and his eventual death.

“The victim died before he could be taken to hospital by Onyinyechi and concerned neighbours,” she said.

The accused was pregnant when the offence was committed. She, however, gave birth to a baby girl while in custody at the Kirikiri Female Prisons. Onyinyechi was in court on Monday with the baby.

Counsel to the accused, Mr Q.U. Ogudu, told the court that the accused had opted for a plea bargain.

“My Lord, we have applied for a plea bargain agreement which the state is not objecting to.”

The prosecutor also confirmed to the court that the parties were working towards the plea bargain.

Justice Josephine Oyefeso adjourned the case to April 6 for a report on the plea bargain agreement.

Posted by Unknown at 7:05 pm
Email ThisBlogThis!Share to TwitterShare to FacebookShare to Pinterest
Labels: Crime