President Buhari's Real Enemies Are The Praise Singers Around Him Who Refuse To Speak Out Against Evil - Emir Of Kano, Muhammadu Sanusi 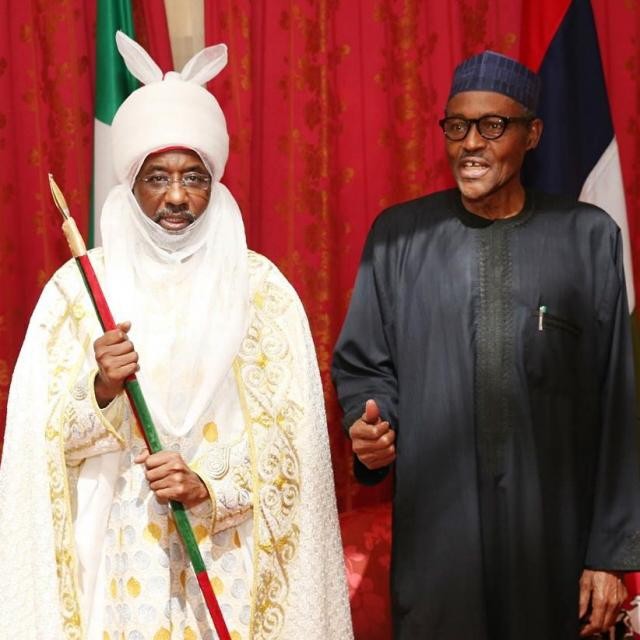 The Praise singers around the President @MuhammaduBuhari are the real enemies of the government who could destroy his efforts. I feel sorry for the people in government because they are surrounded by enemies. T‎he President needed people who will tell him where he goes wrong. I‎ ‎knew power was transient, I spoke the truth during my time at the Central Bank of Nigeria, no matter the consequences.

Some were afraid to speak out against evil because they were afraid of losing their jobs. All the people they were afraid of years ago, where are they today? For those who are still in power, remember that it is transient,‎ If you want to be a true Nigerian, tell the present government where they’re going wrong. A‎t the end of the day, this job, Central Bank, I’d leave it someday. I could die, or my tenure expires, or I’d be sacked. I had no control over it. But I have a control over how I live.

I wasn’t surprised about my suspension; I knew it would happen, because I had been called and asked to resign, and I said ‘no’. I was not going to make it easy for anyone. ‎My answer was simple. You asked me to resign for telling you money has been stolen. Ask the minister to resign first. Y‎ou forget that the person, either the President or the Governor, is also occupying a transient position.

All the people that people were afraid of two, three years ago, where are they today? ‎Power is transient. The only thing that is permanent is what you do for people when you were alive. If you’re a Governor or a President or a Minister, it does not matter how much you have; you will be remembered for service, not the amount of money you have that you cannot even announce.‎

Federal character should be based on merit and not be used as an excuse for nepotism, it should be based strictly on merit and not on family or ethnic sentiments. As we live today, we must understand that it is our duty to respect the various institutions of our country. We cannot sit and watch as spectators as our institutions are being destroyed; to be a true Nigerian we must learn to look at our leadership and tell them where they are going wrong.

The Sharia Law requires you to first seek the consent of your female child before giving her out in marriage.‎ No religion permits infringement on the rights of any child. You find children in the streets hawking when they should be in school while some female children are even forced into marriage‎. Allah ya sauwake.

MY AFRICAN DREAM -
If we want an African Dream we have to produce Africans who are citizens of the world and citizens of the Continent. There are hundred things a young man wants to be. But all you need to do is to look at two or three things and you'll be amazed at how by holding onto one or two simple rules you can define yourself. "Speak truth to power. No matter what the cost is, if it's the truth, say it". To have a happy and successful life, you must stay true to who you are. Do what makes you happy and what you're good at. - Muhammadu Sanusi II

Posted by Lawrencia at 12:47 pm
Email ThisBlogThis!Share to TwitterShare to FacebookShare to Pinterest
Labels: NationalNews