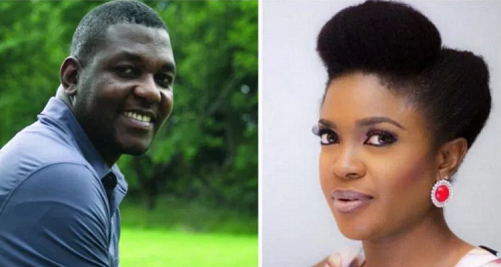 Sometime in September 2016, one Jude Idada accused Omoni Oboli of copyright infringement for the movie, Okafors Law. He accused her of using his storyline.

She, however, kept mum and went on to promote and set a release date for the movie for March 31st with the premiere, yesterday, 24th of March, 2017. The matter taken to court for the copyright infringement and trademark violation.

Yesterday, an injunction was gotten for Okafor's Law to prevent its premiere and also the release on the 31st of March. The 1st, 2nd and 3rd Defendants in the case, are Omoni Oboli, Dioni Visions & Filmone Distribution. At the premier, yesterday, the actress broke down in tears.

The Canada based writer, Jude Idada, had accused Omoni Oboli of stealing his story and idea for her new movie "Okafor's Law." He also stated that Oboli copied his idea for her directorial debut, "Being Mrs Elliott."

In 2014, Idada was invited over by the Obolis, who told him about their new project "Okafor's Law." According to Idada, he 'let his guard' down, and shared ideas with Omoni's husband, Nnamdi Oboli.

They offered him the scripting contract, which he accepted, and after much deliberation charged N750,000. He demanded for a contract.

"I wrote the contract, and I called Nnamdi over the phone. I said 'Nnamdi, I have sent you the contract, let me know when you sign it. He said ok." After a month and a half with no response from them, he gave the script to a friend of his (Chioma), who loved the story.

"In the contract I sent to them, I said to them, Okafor's Law is yours, but the story is mine. If at the end of the day, you don't want to go ahead with the script, I will take everything and give you "Okafor's Law," because that's all you have contributed."

According to him, the Obolis found out about his deal with Chioma, and told people he stole their story. "In 2016, they started shooting. When I read the story, I saw that it was my story. All she did was change the names, but it was essentially my story," Idada said.

However, Justice Ibrahim Buba of a Federal High Court in Lagos has issued an Anton Piller order, directing the seizure of Okafor’s Law.

The court also issued an interim order, suspending the release and launch of the film, in any movie theatre or cinema house on March 31, pending the determination of a motion on notice before the court.

The judge ordered the seizure of all copies, materials, projections or infringing materials, relating to the subject matter.

The News Agency of Nigeria reports that the orders followed an ex parte application filed by a company, Rancoteur Productions Ltd, on behalf of a Canada based script writer, Jude Idada.

Idada lays claim to the film “Okafor’s Law” as his intellectual property.

The plaintiff had filed the suit through Anthony Idigbe, seeking an order, halting the premiere and release of the said “Okafor’s Law”, pending the determination of a copyright infringement suit filed against Oboli.

Joined as first to third defendants in the suit are: Dioni Visions Entertainment, Omoni Oboli, and The Filmore Ltd.

The plaintiff, in its exparte application, had sought an order, restraining the premiere or release of the said film, as well as an anton piller order, seizing all copies of the infringing material.

The exparte application was moved in terms by counsel from the law firm of Idigbe, O. Otudor, who urged the court to grant the orders as prayed.

Delivering his ruling on the exparte motion, Justice Buba granted the orders as prayed.
The court made the following orders:

“An order of interim injunction, restraining the first to third defendants, whether by themselves or their privies, from premiering the feature film “Okafor’s Law”, in Lagos or any part of Nigeria, pending the hearing of the motion on notice.

“An order of interim injunction, restraining the defendant from releasing the featured film in any movie theatre or Cinema house on March 31, pending the hearing of the motion on notice.

“An order of interim injunction, restraining the defendants from distributing the featured film, pending the determination of the motion on notice.

“An Anton piller order is granted to the plaintiff, to enter into the defendant’s premises, Cinema, Studio and other places of dissemination, to seize all copies of infringing materials relating to subject matter.

“An order, directing the defendants to deliver and surrender to the plaintiff’s solicitors, all products and packages with the inscription, “Okafor’s Law” and volume of transaction or trade which have been done by defendants.

“An order directing the defendants to permit the court’s bailiff, and such other persons not exceeding four (4), to enter the premises on any working day of Monday to Saturday at 8am to 8pm, to remove all products or packages with the name “Okafor’s Law”

“An order for a search to be conducted at Viva Heights Odudu Eleyiwo St, Block 15, plot 17 Oniru Victoria Island, and Plot 1378D Joseph Namah close, off Karimu Kotun St, Victoria Island and all other places where Okafor’s Law is stored and sold

“An order declaring that a failure of defendants to comply with the court’s order, will put the plaintiff at liberty to apply for committal to prison of such person,”

The court thereafter, fixed March 29 for hearing of the motion on notice.

NAN reports that the movie “Okafor’s Law” is billed for release on March 31,

The court’s order was, however, served on the defendants on the evening of March 24 shortly before the movie’s premiere.atthe IMAX Cinema in Lagos.

The order consequently, clogged the premiering of the debut movie.

Jude Idada had accused Oboli of copyright infringement on the “Okafor’s Law” movie, adding that she had stolen his story idea for the movie in September 2016.

He alleged that Oboli took the work he had done regarding “Okafor’s Law”, and developed it without giving him due credit.

He avers that the producer, however, went ahead to set March 31, as a release date for the movie, in spite of a demand letter sent to her, as well as a copyright infringement suit instituted.

Posted by Unknown at 10:41 am
Email ThisBlogThis!Share to TwitterShare to FacebookShare to Pinterest
Labels: Gists