Letter to "Padlock Men", Who Doesn't Have Tangible Plans For His Lady, Yet Stands In Her Way Of Finding Love - Adejoro Olumofin 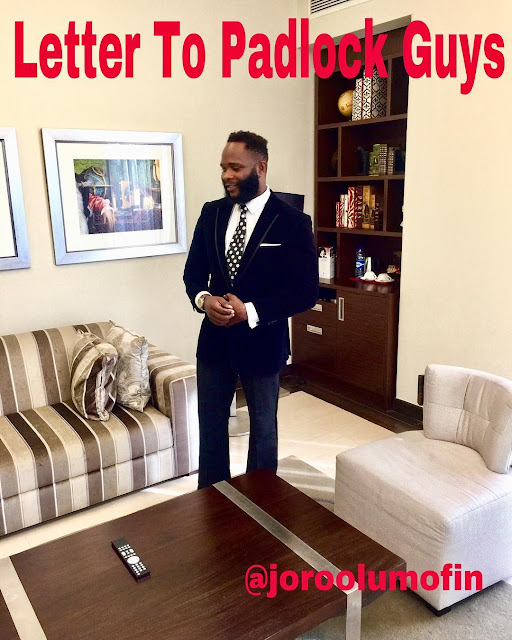 Letter to "Padlock Men" Who is a "Padlock man"? Any man who doesn't have tangible plans for his lady, yet stands in her way of finding love. If you've been dating a lady for more than 2 years and you haven't given her a ring; End that relationship today, don't be selfish, don't be a Padlock Man. Let her find Someone who will step up and is worthy of her time. Since all you do is :

1⃣You use one of the most important things a lady has which is her Time / Age / Youth ( She will never be 24 again, or 25 again, or 27 again) wasting her time is Detrimental.

2⃣You eat her food ( You've turned her into your real life Ekaete / or maid)
3⃣You've increased her V*gina mileage (You have been dating for more than 2 years and you have sex almost every day, what will be left for the next guy?) 4⃣You let her do occasional abortions for you because you know you won't marry her

5⃣You collect her money & Savings ( she gives you money because she's investing in you, not because she's a charity organization but she doesn't know she's investing in you to find your own Mrs right in the nearest future)
6⃣You're using her Star and Prayers
7⃣ You introduce her to your friends / family and instruct them to call her IYAWO WA knowing that's what she wants to hear.
There are a lot of Intentional and Unintentional Padlock Guys who know that they don't have any tangible plans for a lady but yet keep her around and fill her head with tales of imagery love.
Ladies, it is your job to wakeup and realize that you're not this mans lover or girlfriend but you're his default mother / Sponsor. You cater for him, nurture and pray for him with a promise of 💍 Love. A promise alone doesn't cut it these days. SOMETHING TANGIBLE pays more. It's like you're investing in a business without insurance. Last week I received a mail from a lady who wanted to commit suicide because she dated this guy for 4 years, they broke up , 3 months later she saw his picture on a wedding blog. Ladies, This won't be your portion. Amen! It's not about prayers alone. Be aggressive, think like a man and use Logic instead of emotions

Posted by Unknown at 10:19 pm
Email ThisBlogThis!Share to TwitterShare to FacebookShare to Pinterest
Labels: Gists