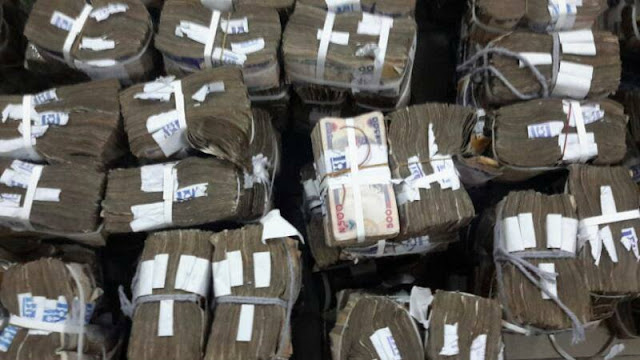 The Economic and Financial Crimes Commission, Lagos zone, this evening uncovered yet another large sum of suspected laundered money to the tune of N448,850,000 (Four hundred and forty eight million, eight hundred and fifty thousand naira) only in a shop at LEGICO Shopping Plaza, Ahmadu Bello Way, Victoria Island, Lagos. The money stashed in several Ghana Must Go bags were in N500 and N1000 denominations, hidden in a shop awaiting conversion into foreign currency.

Relying on information provided by a concerned whistle blower, operatives of the Commision swooped on the shopping complex and sought the identity of the owners of two shops, LS 64 and LS 67 which were under locks and keys. The shops had signages of Bureau de Change. Inquries about the owner of shop 64 indicated he had not been seen for a long time, as they claimed the shop had not been opened for businesss for close to two years. Several calls were put to the owner of shop 67 but there was no response. 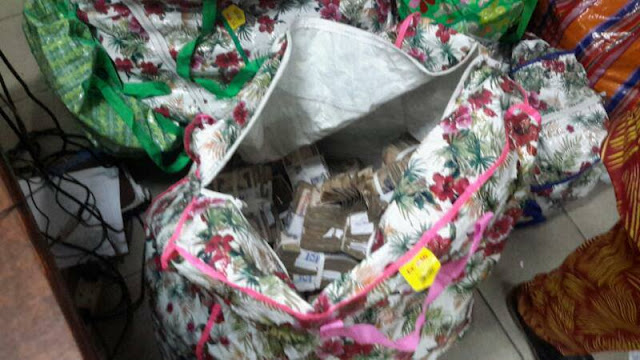 The attention of the plaza's chairman and some traders were drawn in order to force the shops open. There was no money found in shop 67, but in shop 64 heaps of Ghana Must Go bagswere found loaded on the floor of the shop. When the bags were unzipped they were found to contain bundles of naira notes totalling N448,850,000. Traders interviewed at the premises claimed they were not aware such money was housed in there, as the place hardly opens for business.

The Commission is investigating the matter in order to unravel the owner and source of the money.

Posted by Unknown at 10:53 pm
Email ThisBlogThis!Share to TwitterShare to FacebookShare to Pinterest
Labels: Crime