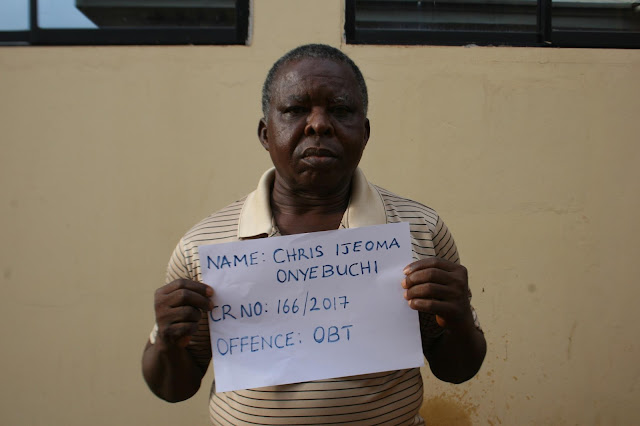 The Economic and Financial Crimes Commission, EFCC on Wednesday April 26,2017 arraigned an Onitsha based businessman Chris Onyebuchi Ijeoma alongside his company, Tellers International Limited before Justice I.B.Gafai of the Federal High Court, Awka, Anambra state on a two-count charge of obtaining money under false pretense and stealing the sum of N10,000,000 (Ten Million Naira Only) belonging to the head pastor and general overseer of a Pentecostal church in the commercial city.

Ijeoma’s ordeal started after a petition was written to the commission alleging that sometime in 2014, he approached the complainant (General Overseer) with a business proposal to help raise funds to finance the importation of insecticide/ pest sprayer from the USA, to the tune of N10m, with a promise to pay back within three months, after the sale of the products.

The complainant further stated that having advanced the sum to the suspect, who was also an elder if the church council, on March 18 ,2014, he waited for more than after three months without receiving any payment as promised. He then approached Ijeoma and demanded to know why the products were not yet imported, to which he said he had invested the money in a US-based cream company and that NAFDAC approval was needed before the goods would be exported to Nigeria; a development different from what was agreed upon.

When the case was called, the suspect pleaded not guilty to the charge.

Defence counsel, C.M. Obijagwam thereafter applied orally for his client’s bail which was denied by Justice Gafai stating he had to apply formally. He further ordered that the suspect be remanded in prison custody pending the hearing of the bail application.

The case has been adjourned to June 6 .

Posted by Unknown at 10:09 pm
Email ThisBlogThis!Share to TwitterShare to FacebookShare to Pinterest
Labels: Crime