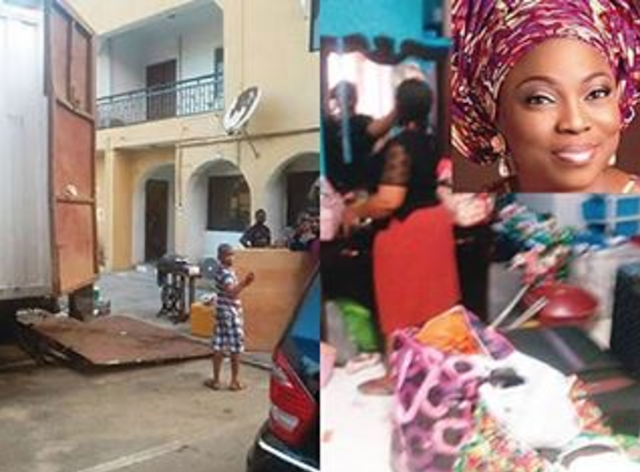 There is anger at the Chapel of Christ the Light, Alausa, Lagos State, after the Presiding Chaplain, Venerable Femi Taiwo, was sacked by the Governing Council allegedly on the order of the state Governor, Akinwunmi Ambode.

PUNCH Metro gathered that Taiwo got the sack on Monday, May 15, without any query or official reason stated in the sack letter.

He was said to have been ordered out of his official quarters where he lived with his wife and two children within 24 hours of receiving the letter.

Despite pleadings from church leaders and other reputable elders in the church, the government was said to have insisted that the cleric must leave the church.

Some church members reportedly contributed money to buy gas cooker, and other household items for the family as they vacated the vicarage.

Investigations by our correspondent showed that Taiwo had angered the Governor’s wife, Bolanle Ambode, who had visited the chapel on Sunday, May 14, when the church held an anointing service.

Church members were said to have filed out to receive anointing oil during the May 14 service without any preference given to Bolanle, who waited endlessly with her entourage.

She was said to have later moved to be anointed and moments later, stormed out of the church, as some of the women leaders ran after her.

Bolanle, who was reported to be visibly angry, allegedly shunned entreaties from the women, which included the wife of the presiding chaplain.

The cleric got the sack the following day.

The directive was issued in a letter dated, May 15, 2017, and signed by the Chairman, Governing Council of CCTL, Mr. Olugbenga Solomon. The letter also ordered the Assistant Chaplain, Very Rev. Ayo Oyadotun, to take over  with immediate effect.

A church member, who witnessed the drama and begged not to be identified, said , “The church had declared seven-day fasting after we lost two prominent members.

“The Sunday service, which was declared as anointing service, was supposed to end the fasting.

“The First Lady, Mrs. Bolanle Ambode, was present with her entourage. She comes to the church once in a while.

“When it was time to be anointed, the cleric asked people to come forward, adding that it was optional. Three people stood at the stage to anoint people. They included the chaplain, the presiding chaplain and one other person.

“People started stepping out one after another. The governor’s wife, after some time, also stepped out and was anointed.”

The source said within a few minutes of taking the oil, Bolanle, who felt disrespected, stepped out with her entourage.

Another member of the church  said, “As she stepped out, it was obvious that she was angry.

“The president of the women’s fellowship and the pastor’s wife ran after her. She shunned them, entered her car and zoomed off.

“When we came to the church on Tuesday, we heard that Venerable Taiwo had been sacked. We were told that he was sacked because the the governor’s wife didn’t get the anointing oil first and she felt disrespected.

“The man that signed the letter is also a civil servant,” the source said.

The governing council is said to be made up of members of the church and some appointees of the government.

PUNCH Metro learnt that Taiwo still had two years to spend as the presiding chaplain when he was fired.

The source said some church members quickly bought household items for his family as they vacated the church premises on Thursday.

He said, “The children went to school on Thursday without knowing that they would not be staying in the vicarage that evening. Church members bought bed and other household items for them because they did not have their own property.

“The members said their pastor did not offend them, and protested the sacking. The governing council members, however, said they should forget it because whatever came from Alausa was final. Most of the church members are civil servants who can’t talk too much.”

Our correspondent reached out to leaders of the church, including Oyadotun, who refused to comment.

However, one of those that confirmed the incident, begged not to be named.

He said the reason Taiwo got the sack was not stated in the letter, adding that the action was not unconnected from the visit of the wife of the governor.

He said, “Let me be straight with you, in the letter there was no reason for the sack. Whatever you are hearing are what members of the church believed could have happened. And there was indeed a protest by the church and the governing council assuaged them on the sacking.

“There was nothing official in that sacking. No investigation, no query, nothing. We had an anointing service on that Sunday. The following day, the venerable was served the sack letter.”

When PUNCH Metro reached out to Taiwo, he said he did not want to comment.

He said, “If you have any enquiry, direct it to the church. But one thing I can say is that I have tried as a pastor to live above board. It will not be right engaging the church or the government on the pages of a newspaper.”

The state Commissioner for Information and Strategy, Steve Ayorinde, said, “The former chaplain had been queried a number of times in the past for conducts unbecoming of his office. The culmination of various indiscretions led to the Governing Council of the church issuing yet another query that led to his being relieved of his post.

“This has got nothing to do with the First Lady. The Chaplain is looking for an excuse to cover his insouciance. It’s nothing but cheap blackmail.”

Posted by Lawrencia at 11:39 am
Email ThisBlogThis!Share to TwitterShare to FacebookShare to Pinterest
Labels: NijaDrama