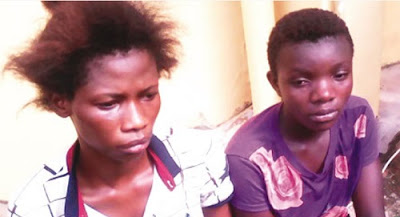 A 14-year-old Nwanne (not real name) in the custody of the Abia State Police Command has confessed that a lady she met at Alaoji near Aba, identified as Chinemerem Isaiah, gave her N200 to attract and steal a three-year-old for her.

She said she met Isaiah when her father sent her on an errand at Alaoji, where she asked her to call one small girl around for her.

She said, “My daddy sent me to give one aunty something; then on the way, I met this other aunty (Isaiah) and she asked me to bring a child. She did not tell me what she wanted to do with the baby.

“So, I called the first baby, she refused to follow me, but when I called the second baby, she came to me and this aunty brought out N200 from her bag and gave me to give the baby. She collected it and followed us.”

The Commissioner of Police in the State, Mr. Adeyele Oyebade, who paraded the suspects at the command headquarters in Umuahaia, the state capital, said they were arrested following a complaint made to the Ogbor Hill Police Station by one Mrs. Rose Ndukwu that her three-year-old daughter was stolen by unknown persons.

Posted by Lawrencia at 9:45 am
Email ThisBlogThis!Share to TwitterShare to FacebookShare to Pinterest
Labels: Crime