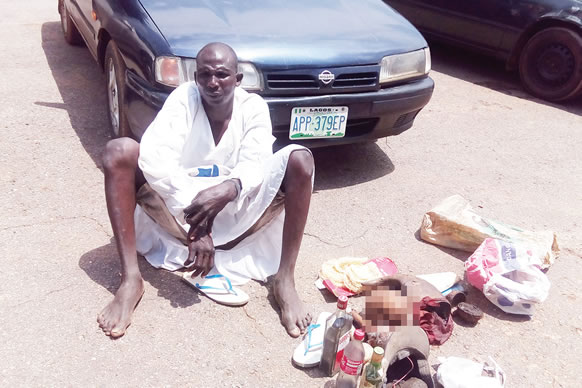 A 55-year-old man was on Tuesday arraigned before an Iyaganku Magistrate’s Court in Ibadan, Oyo State, for being in possession of a human skull.

According to the charge sheet, with number,  Mi/1731c/2017, the accused, Isaiah Alimi, who claimed to be a prophet, was arraigned on one count of unlawful possession.

The prosecutor, Mr Sunday Ogunremi, told the court that the accused, on May 5, 2017, at about 9.10pm on Sango Road in Ibadan Magisterial District, did unlawfully had in his possession, one human skull.

Alimi had told the police in his statement that he was a founder of a church in Lagos.

He said that he inherited some herbalist skills from his father and that the big horn that was caught with him at the time of arrest was used to pray for people who in turn would be compelled to pay him huge sums in exchange for his spiritual services.

The self acclaimed prophet told the police that he got the human skull from an area in Lagos after a bulldozer was used to clear a portion of land.

“They brought the bulldozer to clear the street, so I found the skull there and took it for personal use because I know it will be useful for me. I was arrested when the police stopped a commercial bus I was travelling in for a search,” he said.

In her ruling, the Chief Magistrate, Mrs. Abiola Richard, granted the accused bail in the sum of N75,000 with two sureties in like sum, and adjourned the case till June 28 for hearing.

But Alimi did not meet the bail condition and was remanded in the Agodi Prison.

Posted by Lawrencia at 11:51 am
Email ThisBlogThis!Share to TwitterShare to FacebookShare to Pinterest
Labels: Crime