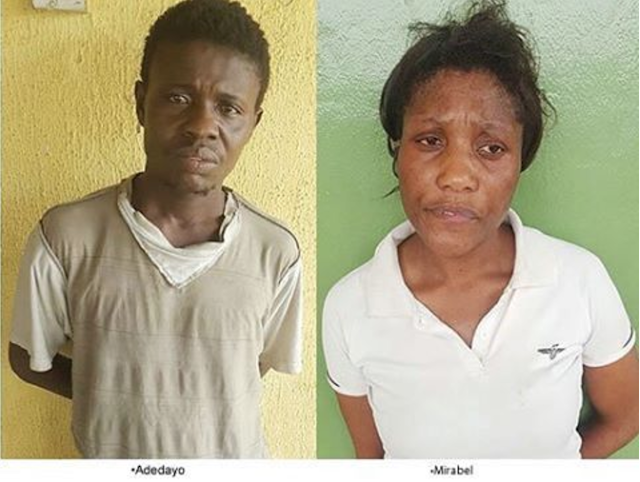 Four-year-old Godwin Shekidat was abducted on February 13, 2017 by a couple at Masaka area of Nasarawa State, while he was on his way back from school.

But when the boy’s father, Monday, a police inspector, received a message from someone claiming to know where his son was, his joy knew no bounds.

But it turned out that the message was sent by a Cameroonian, 30-year-old Tanla Mirabel, who had lodged in Ikotun area of Lagos and seeking healing for her Asthma at TB Joshua’s Synagogue Church of All Nations.

Mirabel, it was learnt, was working in collusion was her Nigerian boyfriend, Rafael Adedayo. The police said both Mirabel and Adedayo saw an opportunity to extort money from Monday and grabbed it.

The duo were said to have got hold of Monday’s phone number through an alert circulated on the social media, which included the phone number of the victim’s father.

Saturday PUNCH learnt that as soon as Monday knew that his son was indeed abducted, he had informed police authorities who tasked the Inspector-General of Police Special Intelligence Response Team with tracking down the suspects.

According to a source in the team, the duo contacted Monday claiming to know those behind the kidnapping of his son. They also demanded he pay them a certain amount of money for that information.

The text messages through which the duo contacted Monday were sent through Mirabel’s number.

One of the text messages, read, “Good evening, I know where your son is, don’t call but just send SMS.  I am risking my life to tell you this but I am doing it on one condition. Will you accept it? I am not joking, I know where he is and my parents are keeping him for rituals.

“Send me airtime so I can send you more text messages because my airtime has almost finished.  I need N40,000 from you and I will tell you where your son is, I am not joking, I promise to tell you where he is.

“The moment you send me the money; I will personally call you to come to my parents’ house with the police.  I will send you my account details, but let me know when you are ready, but delay is very dangerous.

“I have seen the airtime, when are you sending the money.  Tomorrow you will see your son but don’t just involve the police, if you do, you will not see your son again.”

Monday was said to have reported the development to the IRT, which tracked down Mirabel.

The IRT also trailed the owner of an account number in which they instructed Monday to deposit the money. The account belonged to one Mary, a resident of Ikotun area of Lagos.

Mirabel, who is two months pregnant for Adedayo, explained that she met her boyfriend when she travelled to Synagogue Church of All Nations for healing but became stranded.

Narrating how she met Adedayo, an indigene of Bamenda in Cameroun, Mirabel said, “ I came  to Nigeria three months ago and I stayed in my brother’s house in Kano State.  I had only N10,000 on me when I left Kano and came to Lagos. I went to TB Joshua’s church that day because I am an asthmatic patient and I wanted him to pray for me for healing. But when I arrived the church, the ushers did not allow me to see him.

“I became stranded and stood at the bus stop when I had nowhere to go that night. Adedayo approached me there and asked where I was going. I told him I had nowhere to go. He told me he had a lodge where he paid N500 per night and offered to accommodate me.

“I lived with him and he fed me for two weeks. There was a day he left the room with my phone and when he came back, he said he saw a post on my phone about a missing boy and the parents of the missing child published their phone numbers, offering a reward for anyone with information that could lead them to the child.”

Mirabel said Adedayo then directed him to send an sms to the phone number informing the parents that she knew where the missing boy was.

He allegedly told her to request N40,000 for his return.

Mirabel told the police that when she refused, Adedayo threatened to destroy her travelling documents, which he had in his custody.

“I had no choice but to send the SMS  to the phone number he provided. I did not even know about any missing child until Adedayo told me about the post,” she said.

According to her, she did not know the person she was sending a message to was a policeman, adding that her boyfriend thought the boy’s parents were wealthy.

“Adedayo said he had spent a lot of money on me and hoped to recoup it from the money he gets from the missing boy’s father. He said my role was to make sure that the man pays the money,” Mirabel said.

But Adedayo, a Kogi State indigene, denied involvement in the scam.

He said in his statement to the police that he gave an account number to Mirabel without knowing what she wanted to do with it.

He said, “I met Mirabel in February. I approached her and asked if she needed a lodge. She told me that she was stranded and she had no money and begged for assistance.

“I accommodated her for two days.  Later, she called and said she needed an account number.

“I then approached one Mary who lives around my lodge and she gave me her account number, which I gave to Mirabel.

“I went to work but by the time I came back, Mirabel was gone.  I don’t know where she went to. But four months later, I was arrested and was taken to Abuja.

“Mirabel told the police that I was part of the plan to extort the boy’s father but I had no hand in it.  Between God and man, I wasn’t the one who asked Mirabel to send those messages.”

Adedayo said she did not have any sexual relation with Mirabel until March 2017, when some women in their lodge started calling her his girlfriend.

“I didn’t know that she got herself into this mess, I hadn’t seen her in a long time until I was arrested. She is making this whole thing up,” he said.

The police said investigation was still ongoing on the case and that the suspects would be charged to court when investigators finish their work.

Posted by Lawrencia at 11:26 am
Email ThisBlogThis!Share to TwitterShare to FacebookShare to Pinterest
Labels: Crime