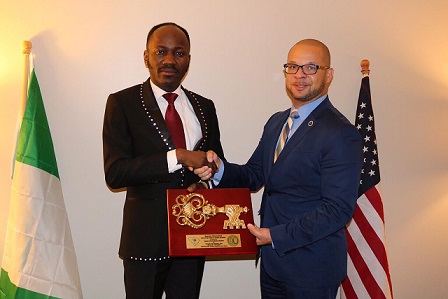 The event took place at the Faithful Centre Bible Church, Inglewood, California where Apostle Suleman is holding the region’s edition of his ministry’s life-changing crusade tagged ‘Help From Above’, which holds between Tuesday, 20th and Wednesday 21st June, 2017.

Leader of the delegation and Rep., John Richard C. King said the honour, which is the highest given to non-residents of South Carolina was sequel to approval of the House of Representatives of the State in recognition of Apostle Suleman’s contribution to humanity. 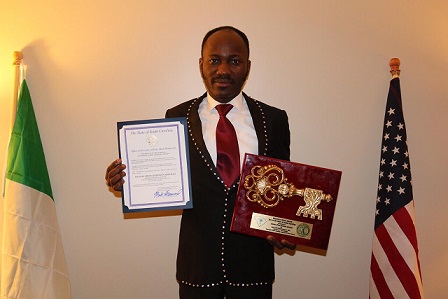 American Govt. grants Apostle Suleman highest non-resident Honorary Citizenship award:
“Apostle Suleman won this highest honor not only because he is noted as a great social worker with outstanding performances in outreach programmes but also his passion for giving without borders” “Apostle Suleman is so privileged, because there are a lot of people out there who are equally blessed if not more but are not willing to do,” noted a member of the award committee.

Apostle Suleman, at the ceremony, dedicated the award to God, his better half and partner, Dr. Lizzy Johnson Suleman as well as members of the Omega Fire Ministries, worldwide.

A letter dated June 8, 2017, conveying the approval of the House and signed by Richard C. King, Chairman South Carolina Legislators Black Caucus, also indicated that the state was looking forward to hosting Apostle Suleman at its Capitol Hill. 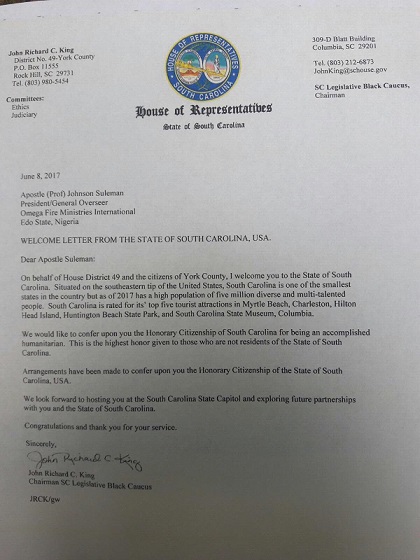 Posted by Lawrencia at 11:10 am
Email ThisBlogThis!Share to TwitterShare to FacebookShare to Pinterest
Labels: Gists