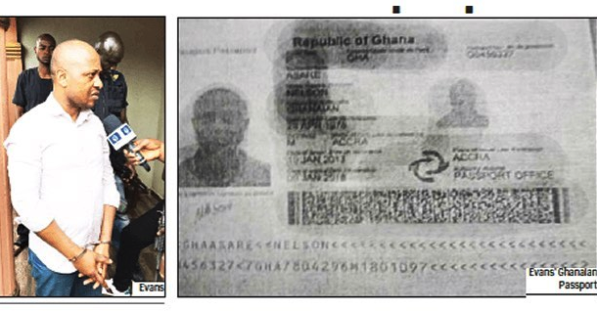 Suspected billionaire kidnapper, Evans, uses a different name in each state of the federation to create varied identities in order to beat policemen tracking him, NewTelegraph reports.

It has also been discovered that in 2013, he was issued with a Ghanaian passport with a fictitious name, Asare Nelson. The Inspector-General of Police, Ibrahim Idris, disclosed this while speaking at the West Africa International Security Conference in Accra, Ghana.

Officials of the Accra Passport Office allegedly connived with Evans to issue the passport on January 10, 2013 to expire in January 2018. Evans had told the IRT team of interrogators that he had a different name for different state of the federation.

For instance, the suspect is known at his Magodo residence as George but he is Evans in the Lagos criminal world. “In Edo he is Sunny; in Port Harcourt, he is Richard; in Lagos he is Evans; in Anambra he is Somtu, etc, while some his girlfriends police arrested know him as Mike.

Security agents in each state are looking for different persons whereas it is the same person. He is extremely intelligent in crime matters,” a source said.

Speaking on Evans’ arrest, Idris said information sharing was crucial to tackling the menace of trans-border crimes in West Africa. He said: “It is through such exchange that we were able to nab a Ghanaian/Nigerian kidnapper two weeks ago, after evading arrest for many years.

For several years, Evans terrorised Nigerians and nationals of many countries across West Africa. Efforts to apprehend him did not yield the desired results until we spread our search net wider.” The IG also urged the Ghanaian authorities to investigate how Evans got their passport.

According to Ablakwa, the use of Ghanaian passport by Evans exposes the weaknesses in the country’s passport system. He said: “Those loopholes in the passport system could be used by terrorists.”

Posted by Lawrencia at 10:42 am
Email ThisBlogThis!Share to TwitterShare to FacebookShare to Pinterest
Labels: NationalNews