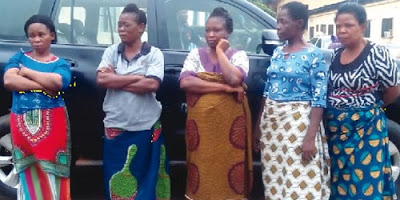 OPERATIVES of the Imo State Police Command have arrested a five-woman gang, which specialises in child trafficking for stealing a three year-old boy in Ngor Okpala Local Government Area of the state.

Parading them before newsmen in Owerri, the state capital, the Commissioner of Police, Chris Ezike, commended the Surveillance Unit of the command, led by Bassy Asamba, a Superintendent of Police, for doing a good job and for going the extra mile to Lagos to rescue the child.

Ezike described the suspects as a chain, whose act could best be described as shameful.

“In the 21st Century when people are engaging in productive activities, like going to the moon, these ones are shamelessly engaging in buying and selling of God’s beautiful creation.

“To learn that they sold this handsome child for a pittance of N600,000 is most annoying and shameful.

“We will not spare them. We will arraign them in court on Monday (today) for them to answer their charges. The gang is a criminal chain and we will ensure that the law takes its full cost,” he said.

Responding to a question, Ezike said the police officer identified as Felix, whom the suspects accused of being part of the gang, was facing an orderly room trial and would be dismissed and charged to the court if found guilty of being part of the child-trafficking syndicate.

When interviewed, the prime suspect, Okere, who allegedly stole the child at a funeral ceremony confessed to the crime, but stated that one police man, Felix, planned and executed the criminal act with her.

She said that her husband and one other person she named as being part of the crime, Rose, were on the run.

The alleged buyer, 55-year-old Uzoamaka, who told newsmen that she lived in Lagos, said she bought the child for N600,000 from 54 year-old Mrs. Amadi in Nnewi, Anambra State in April.

Posted by Lawrencia at 9:14 am
Email ThisBlogThis!Share to TwitterShare to FacebookShare to Pinterest
Labels: Crime