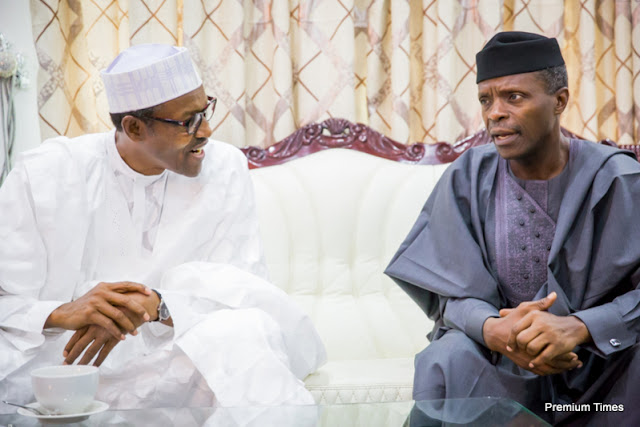 Nigeria’s President Muhammadu Buhari is recovering fast from an undisclosed illness and should be back in Nigeria soon, his deputy said on Wednesday, after a whistlestop trip to meet the ailing head of state in London.

Vice-President Yemi Osinbajo told reporters before a weekly cabinet meeting in Abuja that he had been in London on Tuesday to “check up on” the 74-year-old Buhari, who left for medical treatment in the British capital on May 7.

“Of course I’ve been speaking to him on the phone and I thought it would be a good thing to go and see him and generally check up on how he was doing and also to brief him on developments,” he said.

The meeting lasted for “well over an hour”, he said, adding: “We are expecting him (back in Nigeria) very shortly.”

Osinbajo, who has been acting president since Buhari’s departure, made no mention of the president’s medical condition, which has led to growing calls for clarity about his fitness to govern.

The former military ruler has now spent nearly four months of this year out of the country and has not been seen in public for more than two months.

When he returned from a previous trip to London in January and February, Buhari said he had “never been so sick” and disclosed he had undergone blood transfusions and a battery of tests.

Aides have previously played down rumours that he was terminally ill with cancer or even dead.

– Power struggle? –
His wife Aisha, who flew to London earlier this month, on Monday posted a cryptic message on her Facebook page in response to a Nigerian senator’s description of Buhari as “the absent Lion King”.

“God has answered the prayers of the weaker Animals. The Hyena’s and the Jackals will soon be sent out of the kingdom,” she wrote.

The description has been seen as a reference to a supposed behind-the-scenes struggle for power and influence in government during Buhari’s absence.

The Nation newspaper, owned by the founder of Buhari’s All Progressives Congress party, Bola Tinubu, said Osinbajo’s trip to London had been secretly planned for weeks.

“The acting president has actually been relying on third-party information and purported directives from the president in London,” an unnamed source was quoted as saying.

Another said: “The trip had been planned in the past three weeks but was only known to few people for strategic reasons. The ‘Jackals and Hyenas’ were beaten to it.”

Osinbajo wanted “undiluted information” on Buhari’s health, to brief his boss on decisions he had taken in his absence and get approval for policy, the second source added.

Posted by Lawrencia at 12:31 pm
Email ThisBlogThis!Share to TwitterShare to FacebookShare to Pinterest
Labels: NationalNews